Louis Kronberg was a prolific painter, who was renowned for his oil and pastel portraits of ballet and Spanish flamenco dancers. His nudes were as notorious, but often pieces such as this one were even more beautifully rendered. Born in Boston, Kronberg began his formal artistic training at the School of the Museum of Fine Arts, where he studied with the highly regarded painters Edmund C. Tarbell and Frank Benson. He continued his studies in New York with William Merritt Chase at the Art Students League. In 1894, Kronberg was awarded a Longfellow traveling scholarship, which enabled him to go to Paris for several years to study at the Académie Julien with Benjamin Constant, Jean Paul Laurens and Raphael Collin. While in Paris, Kronberg was exposed to the bright, expressively painted work of the Impressionists and Post-Impressionists, which differed from his academic and somewhat dark and subdued style. Furthermore, Kronberg was drawn to a new subject matter — theatrical performers, ballet and flamenco dancers — and the radical compositions of Edgar Degas, with whom he studied the medium of pastel. He was also influenced by the likes of James McNeill Whistler and Japanese woodcuts, which were popular at the time. Kronberg returned from France and settled in his native Boston, where he had a studio in Copley Hall. He frequently exhibited works in the Boston Arts Club and at the Art Institute of Chicago during the first decade of the 20th century. His early works were well received and included portraits, nudes, and paintings depicting ballet dancers and Spanish flamenco dancers. By the 1910s, Kronberg was exhibiting at all of the major venues in the United States including the National Academy of Design, Pennsylvania Academy of the Fine Arts and Pan-Pacific International Exposition in San Francisco. His work combined the formal elements of the Boston School of painting — strong figural presence and a high degree of craftsmanship — with the subject matter and unusual cropping of the Impressionists, and he gained recognition as being “the Degas of America.” Kronberg moved to New York in 1919 and continued to execute scenes of ballet and Spanish flamenco dancers. He frequently traveled to Europe, specifically Paris, for leisure and work. Following the death of the famous art advisor and scholar Bernard Berenson, Kronberg acted as the advisor to Isabella Stewart Gardner, purchasing works for her museum while in Europe. Louis Kronberg received recognition and awards throughout his life, including being elected an associate to the National Academy of Design, as well as later being inducted as a knight in the Legion d’Honneur in 1951. His work is included in numerous museums in the United States and France, notably the Metropolitan Museum of Art, Museum of Fine Arts, Boston, and Musée d’Orsay in Paris. Later in his life, Kronberg worked almost exclusively in watercolor and pastel; he even funded and organized the outstanding watercolor of the year award for the Art Association, which began at his request in 1949. His pieces reside in the collections of the Albright-Knox Art Gallery, Buffalo, New York; the Art Institute of Chicago; the Butler Institute of American Art, Youngstown, Ohio; the Isabella Stewart Gardner Museum, Museum of Fine Art and New York Museum of Fine Arts, all in Boston; the Musée d’Orsay, Paris; the Newark Museum of Art; the Pennsylvania Academy of the Fine Arts, Philadelphia and the San Diego Museum of Art. 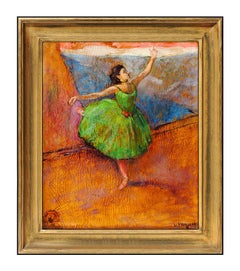 “Waiting for the Dance”
By Louis Kronberg
Located in Southampton, NY
Here for your consideration is a beautiful oil on canvas painting by the American artist, Louis Kronberg. In very original condition with a period gilt frame. Signed and dated lower...
Category

Louis Kronberg
“Waiting for the Dance”, 1936 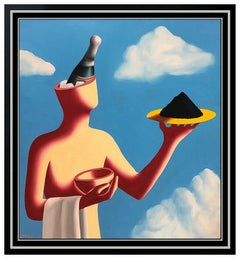