Kiyoshi Saito was born in Fukushima Prefecture in 1907. At the age of five, he moved to Otaru in Hokkaido, where he would come to serve as an apprentice to a sign painter. Saito became infatuated with art after studying drawing with Gyokusen Narita and moved to Tokyo in 1932 to study Western-style painting at the Hongo Painting Institute. He began experimenting with woodblock prints and exhibiting his works with Nihon Hanga Kyōkai in 1936. Saito mainly worked in oil painting until his invitation from Tadashige Ono to join the Zokei Hanga Kyokai in 1938, at which time Saito made the woodblock print his primary medium. He worked with the Asahi Newspaper Company in 1943, where he met Kōshirō Onchi. This chance encounter led to an invitation to Ichimoku Kai and membership to Nihon Hanga Kyōkai in 1944.

Saito’s printmaking career was put on hold due to the war. During the occupation, he sold his first print in an exhibit with fellow artists Un’ichi Hiratsuka and Hide Kawanishi. In 1948, Saito exhibited at the Salon Printemps, an event sponsored by Americans for Japanese Artists. At the Sao Paulo Biennale of 1951, Saito won first place for his print Steady Gaze. In competition with Japanese oil painting and sculpture, this was a turning point for Japanese printmakers: For the first time in Japanese history, prints overtook painting. This achievement roused the Japanese art establishment. In 1956, Saito was sponsored by the state department and the Asia Foundation to travel and exhibit around the United States and Europe. As a sōsaku-hangaartist, Saito’s prints are self-drawn, self-carved and self-printed. His early works are distinguished by an attention to realism and three-dimensionality. As his style evolved, his prints became flattened and two-dimensional, featuring strong and refined designs with color and texture. Kiyoshi Saito passed away in 1997.

"Shoji Kyoto" Japanese Interior Woodblock Print
By Kiyoshi Saitō
Located in Houston, TX
Japanese print with neutral tones. Signature and seal lower right. Mat board covers the margins which may have the title, date and the number of the edition. Visible: H 15.75 in. x W...
Category 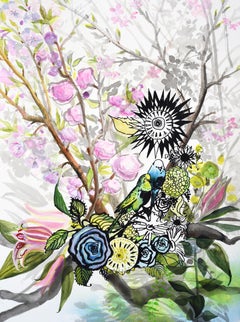 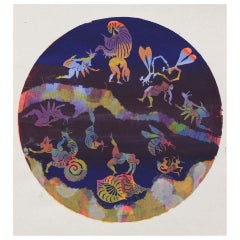 H 20.125 in. W 14.75 in.
Cat and Kittens (Mother Love)
By Kiyoshi Saitō
Located in Burbank, CA
A mother cat dozes while her kitten plays nearby, seemingly about to pounce on his mother's tail. Saito was a true master of the woodblock print medium, employing richly textured bac...
Category

H 14 in. W 20 in. D 1 in.
Haniwa (1) Woodblock
By Kiyoshi Saitō
Located in Soquel, CA
Woodcut print of a mask and vases Haniwa (1) (Funerary objects meant to be seen) by Kiyoshi Saito (Japanese, 1907-1997). Signed by the artist in white gouache in the lower left corne...
Category

H 13.25 in. W 18.5 in. D 0.5 in.
Winter in Nikko (Jyogyodo)
By Kiyoshi Saitō
Located in Burbank, CA
Red Japanese temple in snow. The vermilion timbers of the Jyôgyôdô temple in the ancient city of Nikko contrast beautifully with the leafless trees and fallen snow. The snow features...
Category

H 14 in. W 20 in.
Steady Gaze
By Kiyoshi Saitō
Located in San Francisco, CA
This artwork is an original color woodcut (not a reproduction - it is signed in the plate) on thin Japan paper, titled "Steady Gaze," 1952, by Japanese artist Kiyoshi Saito (1907-199...
Category

H 25 in. W 31.5 in. D 1 in.
Striped Mother Cat and Kittens
By Kiyoshi Saitō
Located in Burbank, CA
A striped mother cat feeds her two kittens. The background is a grey woodgrain, which gives the work a delightful feeling of floating. There is a layer of woodgrain-patterned mica th...
Category

H 11.23 in. W 16.54 in.
Mother Cat and Kittens
By Kiyoshi Saitō
Located in Burbank, CA
A mother cat feeds her two kittens. The background is a grey woodgrain, which gives the work a delightful feeling of floating. There is a layer of woodgrain-patterned mica that has b...
Category

H 11.23 in. W 16.54 in.
Shop Girl, Cardin, Paris
By Kiyoshi Saitō
Located in Burbank, CA
Chic design of a seated Frenchwoman, her white hands pensive against her boldly patterned red top. Her hair is in an updo, and a blue cabochon ring stands in contrast on her left han...
Category