Keith Haring (1958–90) began experimenting with his bold, graphic lines and cartoon-inspired figures on the walls of New York City subway stations in the early 1980s. He called them his “laboratory,” places to develop a radical new aesthetic based on an ideology of creating truly democratic public art.


Haring’s paintings, prints and murals address the universal themes of death, love and sex, as well as contemporary issues he experienced personally, like the crack-cocaine and AIDS epidemics. They derive much of their impact from the powerful contrast between these serious subjects and the joyful, vibrant pictographic language he uses to express them, full of dancing figures, babies, barking dogs, hearts and rhythmic lines, as well as references to pop culture.


To make his art even more accessible, in 1986, Haring opened the Pop Shop in Soho. In a foreshadowing of today’s intermingling of art and fashion, the shop sold merchandise and novelty items featuring imagery by Haring and contemporaries like Kenny Scharf and Basquiat. While his works sometimes included text, for the most part, he chose to communicate through drawing.


“Drawing is still basically the same as it has been since prehistoric times,” Haring once declared. “It lives through magic.” 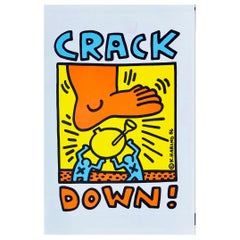 Keith Haring, Pink Love, invitation made for a friend's wedding 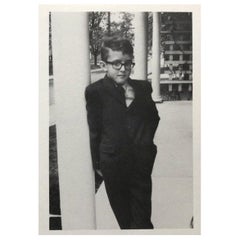 H 39.75 in. W 39.75 in. D 1.5 in.
Contemporary Modern Framed Offset Lithograph Signed Keith Haring Red, 1988
By Keith Haring
Located in Keego Harbor, MI
For your consideration is a gorgeous, framed offset lithograph, signed and dated by Keith Haring, 1988. This poster was the artwork for the A & M Christmas album. In excellent condit...
Category

H 11.75 in. W 16.5 in. D .01 in.
Contemporary Modern Famed Offset Lithograph Signed Keith Haring 1984 Yellow
By Keith Haring
Located in Keego Harbor, MI
For your consideration is a funky, framed offset lithograph, signed and dated by Keith Haring, 1984. In excellent condition. The dimensions are 18.25" W x 24.25" H. This poster i...
Category