Born in Borghorst, Germany in 1904, Karl Drerup earned a master’s degree in graphic arts working under Hans Meid at the Academy in Berlin in 1926. He then traveled to Italy to study painting with Felice Carena at the Academy in Florence. The political situation in Germany kept him from returning. His journey, accompanied by his wife Gertrude, led him to Madrid and then to the Canary Islands in 1934. He immigrated to New York City in 1937. Already an accomplished painter, ceramist and engraver, Drerup mastered enamel-making during his New York years and became a Charter Member of the Society of Designer-Craftsmen in 1945. At mid-century, Drerup was pre-eminent in the field of enamel painting on metal. He played a major role in re-establishing its popularity in the United States by rediscovering and applying a variety of techniques including multi-fired painterly renderings in wet charged glass, Cloisonne and Grisaille. In 1941, the Metropolitan Museum of Art in New York began buying his enamels. His works were subsequently purchased by many permanent collections throughout the world including the Museum of Fine Arts in Boston, The Currier Museum of Art in Manchester, the Dallas Museum of Art, the State of New Hampshire’s Living Treasures Collection and museums in Los Angeles, Wichita, Newark and the Smithsonian Institution. In 1946, Drerup and his wife moved to Thornton, New Hampshire. He immediately became active in the League of New Hampshire Arts and Crafts and served as a member of the League Council. Two years later, he became Plymouth State College’s first art professor. He said he would come to demonstrate for two days and stayed for 20 years. In this capacity, he directly influenced many generations of practicing artists, craftspeople and teachers throughout New England and the United States. In 1986, after 18 years of retirement, the college named its art gallery after him and granted him an Honorary Doctorate. Drerup set exacting standards for himself and his work. His extensive knowledge of art history coupled with his conviction that his work should speak for itself and has contributed to the excellence of American Craft. In 1995, Drerup became a Fellow of the American Crafts Council and in 1989, he became a New Hampshire Living Treasures Award recipient. Drerup died at the age of 94 on November 22, 2000.

"Sailing Ship and Dolphins," Important Mid-Century Bowl with Vivid Enamels
By Karl Drerup
Located in Philadelphia, PA
An extremely fine piece of enamel painting by master artist Karl Drerup, this large bowl depicts a sailing ship with seagulls overhead, and dolphins cavorting below, in a sea of gorg...
Category

"Spouting Whale," Mid-Century Masterpiece of Enamel Painting by Drerup
By Karl Drerup
Located in Philadelphia, PA
The finest and most dramatic piece of enamel painting we have seen by master artist Karl Drerup, this large bowl depicts a spouting whale amidst a gorgeous sea of waves in shades of ...
Category

"Fishermen in the Mediterranean," Important Mid-Century Enamel by Drerup
By Karl Drerup
Located in Philadelphia, PA
Featuring the deep blue, red and green jewel-tones for which he was famous, this rare and important footed enamel dish was created by the great master of enamel painting, Karl Drerup...
Category

"Fishermen in the Mediterranean," Important Mid-Century Enamel by Drerup

Brilliant, Rare "Nativity" Enamel Panel by Karl Drerup
By Karl Drerup
Located in Philadelphia, PA
Arguably the finest enamel artist that America has ever seen, Karl Drerup immigrated here from Germany in 1937, his anti-Nazi activism and his wife's Jewish heritage forcing them to ...
Category 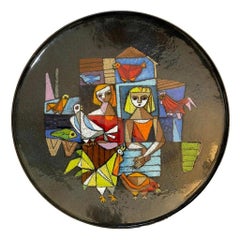 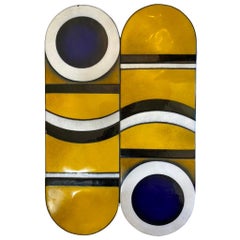 Group of Enamels by Karl Drerup