Karl Baumann was an American artist of German origin. He was a leading California Abstract Expressionist, a noted professor of painting at the California College of the Arts and teacher at the San Francisco Museum of Modern Art. He was born in 1911 in Leipzig, Germany. His father, Willie Baumann, came from a family of wealth, while his mother, Augusta Baumann, came from a more poor background. Before World War I broke out, Willie took his family to America and settled in New York, hoping to find a better life for his wife and son. They eventually separated and Willie moved to San Francisco to work for Schmidt Lithograph, Baumann stayed with his mother, who worked by making postcards and toy soldiers. Augusta would eventually contract lead poisoning and die due to tuberculosis in 1916. Baumann spent the rest of his childhood with his maternal grandparents and it was there that he got his inspiration to do art from his grandfather.

Baumann started to draw when he was five years old with no formal training. He would often draw with colored pencils and would initially draw pictures of soldiers before becoming more invested in plants and animals. In his childhood, he would take walks with his grandfather, which brought out his love for nature. During these walks, Baumann would often pick up and collect rocks and wood, as well as learn the name of trees. Eventually, later in his life, his studio was filled with objects relating to nature such as aquariums, plants, rocks, woods and seashells he collected while walking through the beach and Golden Gate Park.

After the war, In 1929, Baumann would eventually be reunited with his father Willie, who had saved enough money to send. They had limited contact with each other due to Willie's illness. Baumann would join his father at the Schmidt Lithograph and work there. Five years later, he married a woman called Naomi Pratt and would eventually have a son named Nicholas. Baumann was eventually fired from his job due to his pro-union beliefs, which left him the chance to pursue his most important option in his career; to work for the WPA as an easel painter. In 1936, the WPA employed Baumann as an easel painter. Due to his environment which consisted of being surrounded by artists, Baumann invested all of his energy into his paintings and began to explore nature more. Baumann began to change his painting style as well. In 1940, Baumann won a competition in the U.S. Maritime Commission for one of his art panels. He exhibited his works at the Golden Gate International Exposition, the Palace of the Legion of Honor, the San Francisco Museum of Modern Art, and the Metropolitan Museum of Art in New York City. He began to gain a reputation as a leading Californian Abstract Expressionist. Near the late 1940s, Baumann became highly respected in the Bay Area, specifically in the art community. He was hired in 1947 by the California College of the Arts and Crafts as a professor of painting and also taught for a time at the San Francisco Museum of Modern Art. Baumann was somewhat neutral about his impact on his students despite many of his students being influenced by him and some were inspired. It is noted that Baumann's early works are in the style of German Expressionists before his later works became more abstract.

On the 7th of February 1974, Baumann was diagnosed with lung cancer and had six months to live. When Baumann was administered cobalt, it made him very sick and weakened him greatly. In response to this, Baumann painted Cobalt in 1974. Two years later, Baumann incredibly showed no signs or forms of cancer. He continued to produce a few more paintings after 1974 had passed. Unfortunately, in 1976, Nicholas was murdered in San Francisco. This had a severe negative impact on Baumann, enough to the point, where he could no longer find the urge to paint. Baumann died in 1984 due to a heart attack and his estate is now handled by Maxwell Galleries of San Francisco. 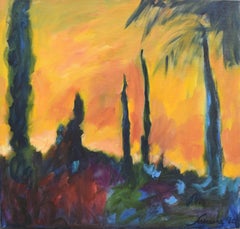 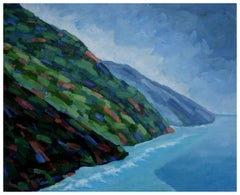