Jun'ichiro Sekino was born in Aomori Prefecture, Japan, in 1914. He began making wood print art while still in middle school before formally pursuing etching with Kon Junzo. Active in the print scene, Sekino participated in the Chokojuto (1932) and Shin Hanga (1935) art shows, and exhibited with the Nihon Hanga Kyokai group as well. After winning the Teiten prize for etching in 1936, he moved to Tokyo in 1939. Jun’ichiro Sekino continued his studies at the Etching Institute of Takeo Nishida, where he also trained in oil painting and drawing.

Sekino commenced his study of woodblock prints with Koshiro Onchi and soon joined the Nihon Hanga Kyokai during the 1930s, followed by the Kokugakai in 1940. He exhibited worldwide, winning particular acclaim in the United States for his woodblock prints following World World II. In 1958, the Japan-America Society brought Sekino to the United States, where he taught at Oregon State University in 1963. Upon returning to Japan, he assumed a position at Kobe University in 1965 and received the medal of the Imperial Household Agency in 1981. Sekino’s work is greatly inspired by old Japanese and European masters alike, such as Sharaku and Albrecht Durer. The subject of his work varies, although he commonly focused on portraits, landscapes and semi-abstract designs. Jun'ichiro Sekino passed away in 1988. 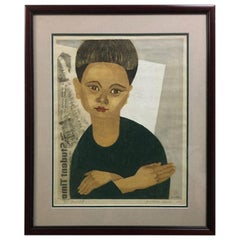 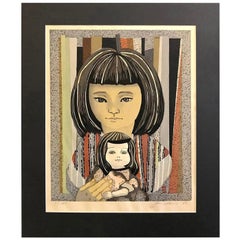 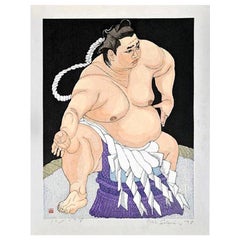 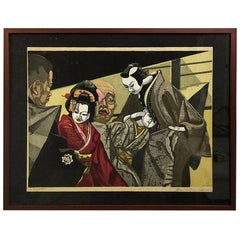 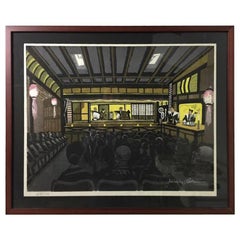 H 25.25 in. W 31.25 in. D 1 in.
Junichiro Sekino Limited Edition Double Oban Rare Japanese Woodblock Print, 1978
By Junichiro Sekino
Located in Studio City, CA
A very rare and extremely scarce, limited edition woodblock print by Japanese master printer Junichiro Sekino. This from a series of rooftops he did throughout the world. It's hard t...
Category