Jules Moigniez was born in Senlis sur L'Oise, France in 1835 and died in Saint-Martin-du-Teire, France on May 29, 1894. The son of a metal gilder, Moigniez was a student of Paul Comolera. Moigniez debuted at the Exposition Universelle in 1855 with Pointer, Pheasant, Falcon and Weasel each in plaster. Moigniez contributed regularly to the Paris Salon from 1859–92 during which he exhibited over 30 sculptures including Pointer, Pheasant, Falcon and Weasel in bronze. Moigniez was awarded an honorable mention at the Salon and received a medal in London at the Great Exposition in 1862. Moigniez lived most of his life in Paris. During his career, Moigniez was widely popular in France, England and America. His bronzes were most decorative, particularly those of game birds. Moigniez also sculpted dogs, farm animals and equestrian groups. Moigniez's dogs reflected the "naturalism" style of Pierre Jules Mene. Moigniez’s bird sculptures were reminiscent of paintings by deHondecoeter, Casteels and Snyders. Moigniez’s sculptures of birds reflect dynamic movement as if captured through a high-speed photographic portrait. Moigniez bronzes were edited, cast, by the foundry his father opened in 1857. A wide variety of patinations, including silver plate, golden bronze and gilding were unique to these lifetime casts. After Moigniez’s death, most of his bronzes were cast by A. Gouge, who also edited most of Comolera's sculptures.

Bronze "Falcon" Sculpture on Marble Base by Jules Moigniez

19th Century French Patinated Bronze Hunt Dog Sculpture Signed J. Moiniez
By Jules Moigniez
Located in Dallas, TX
This antique bronze sculpture was created in France, circa 1870. The composition features a setter standing on rocky ground with leaf and branch decor and looking to the side. The hu...
Category

Pair of Bronze Game Bird Sculptures by Jules Moigniez
By Jules Moigniez
Located in London, GB
Each bird in this pair is a partridge—the ubiquitous European game bird. The partridges are cast from bronze and are finished with a beautiful, polychrome patina. Each partridge in t...
Category

Animalier Bronze of a Pointer by Jules Moingiez

Bronze Inkwell Sculpture "Les Moutons à L'abreuvoir" by Jules Moigniez
By Jules Moigniez
Located in Paris, FR
Bronze inkwell sculpture with nuanced brown patination. Two ink pots are cleverly hidden at either end of the sculpture: One in the stump of the tree and the other under a rock. Moig...
Category

Jules Moigniez Bronze Sculpture of Three Sheep and a Lamb
By Jules Moigniez
Located in Philadelphia, PA
Bronze grouping of sheep with a nuanced brown patination. Moigniez' intricate work on the surface of the piece created a true-to-life rendering of the sheep's fleece. The group is se...
Category

Jules Moigniez Bronze Sculpture of Three Sheep and a Lamb

Animalier French Bronze 'Pheasant & Weasel' by Jules Moigniez
By Jules Moigniez
Located in London, GB
A large and impressive late 19th century French animalier bronze group of a Pheasant surprised by a weasel, both animals heightened with original gilding and raised on a naturalistic...
Category

Jules Moigniez Horse Sculpture
By Jules Moigniez
Located in Norwalk, CT
An untitled bronze sculpture depicting a horse and greyhound. Beautiful bronze work, standing on realistic base, signed on the back of the base: J. Moigniez (French 1835-1894). This ...
Category 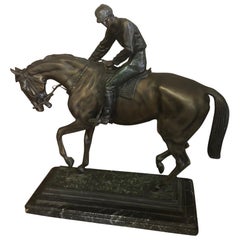 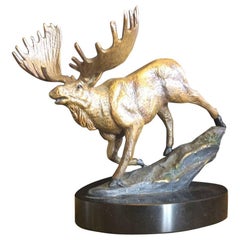 Bronze Sculpture "Lovers" on Marble Base by Luca Madrassi

American Eagle Landing Sculpture on Marble Base by C. Jere

Swan Sculpture on Travertine Base by Porta-Celi
Located in San Diego, CA
Category

Swan Sculpture on Travertine Base by Porta-Celi

Cat Tail and Duck Sculpture on Onyx Base by C. Jere
By Curtis Jere
Located in San Diego, CA
Category

Cat Tail and Duck Sculpture on Onyx Base by C. Jere