Joseph Caraud attended the École des Beaux-Arts and studied under Alexandre de Pujol, a former student of Jacques Louis David. However, even before attending there, Caraud had already exhibited his works at the Salon and was quite successful. Caraud's paintings are in the 18th-century style and are reminiscent of the works of Fragonard, Greuz and Watteau. His works stood out as they did not follow the new style of realism that had taken over France. Instead of pastoral scenes painted in dark colors, Caraud painted domestic scenes with vivid light and warm colors. His historical depictions capture the upper classes and bourgeois of the Louis XV era in highly detailed interior scenes. Between 1848–51, he frequently painted maidservants, Algerian scenes and figures from Italian operettas. His works were popular amongst the upper classes and soon were copied so that anyone could own a Caraud. Caraud's depictions of pretty women and cats are a reflection of the times. Victorians were just opening their homes to pets as a symbol of their control over nature and the lower classes. In 1867, he was awarded the Chevalier de la Légion d'Honneur. He also participated in the 1889 Exposition Universelle in Paris, where he earned a bronze medal. Caraud continued his involvement in the Parisian Salons until 1902 when he exhibited at the Jardin des Tuileries (Tuileries Garden) for his final show. He died in 1905, the exact date is unknown. 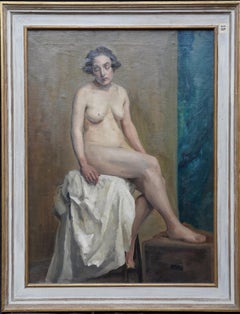 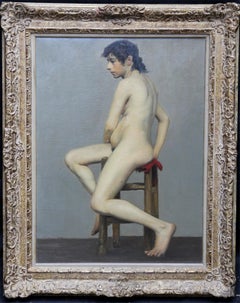 Portrait of a Lady in a Landscape - British 19thC art oil painting , Circa 1890