Josef M. Arentz was a renowned painter of maritime scenes, though he also painted numerous New England landscapes and portraits. He was born in Odendorf, Germany in 1903 and came to the United States in 1926, at the encouragement of an uncle living in Ohio. After painting stage scenery in Tiffin, Ohio, Arentz eventually moved to Tampa, Florida, where he and a friend established the Florida Art Academy. He then moved to Baltimore, Maryland, where he accepted a position with the art department of the U. S. Printing and Lithograph Company, where he stayed until 1946. During that time, Arentz had a one-man show, and a work accepted for the Maryland Artists Exhibition earned an award from the Baltimore Museum of Art. Shortly thereafter, he began reproducing some of his paintings for the New York publisher, David Ashley. A visit to Portland Head Light in Portland, Maine, inspired Arentz's move to Maine. For many years, he maintained a summer gallery on Wharf Street in Kennebunkport, Maine. 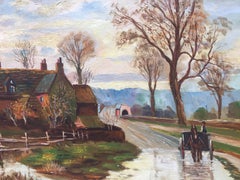 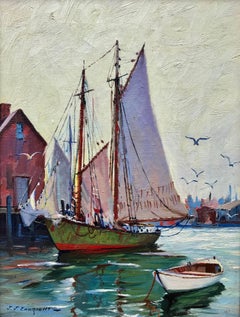 "After the Snow"
By Paul Lauritz
Located in Southampton, NY
Category