José Luis Cuevas was a Mexican painter, draftsman, writer, engraver, sculptor and illustrator. Although the biography on his personal site indicates the date of 1934, his older brother, the doctor and psychoanalyst Alberto Cuevas Novelo, has assured that he was actually born in the year 1931. He was known as the "terrible boy" of painting in Mexico, and also had the nickname of Gato Macho. From his first exhibition in Washington in 1954, when he was only 20 years old and from the Washington Post and Time Magazine, he learned to exploit his public image as a macho, seducer of women, and an artist without hair on the tongue. An extraordinary sense of vanity and narcissism led him to photograph himself day after day since 1955. He challenged the Mexican mural movement that dominated at that time and was a prominent member of the Rupture Generation. He was a self-taught artist, with many very marked styles and influences on the dark side of his life, and he frequently distorted figures and generated debates. He was a very controversial character, not only for artistic reasons, but also for his controversies with other writers and artists. In 1992, the José Luis Cuevas Museum was inaugurated, which houses many of his works and his personal art collection in the Historic Center of Mexico City. 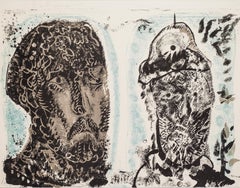 MACBETH
By José Luis Cuevas
Located in Aventura, FL
Hand signed and numbered by the artist. Artwork in excellent condition. Additional images are available upon request. Certificate of Authenticity is included. Of 110. All reasonabl...
Category

Jose Luis Cuevas, "Denizens of the Underworld", Lithograph. 1968
By José Luis Cuevas
Located in Long Island City, NY
This lithograph was created by Mexican artist Jose Luis Cuevas. Known for his aggressive attitude and strong beliefs, Cuevas has said that his drawing represents the solitude and iso...
Category