Calogero was born August 20, 1922 in Catania, Sicily. Self-taught Artist First exhibitions in 1945 in Sicily and Rome were very successful. He arrived in Paris in 1947 and studied at the École des Beaux-Arts. He is best known for his dreamlike Surrealist and genre works.

He exhibited at the Gallery Hervé in 1951 and the following year he went to New York to present his show, then in 1953 he was invited to Los Angeles, where he returned two years later, and from where he regularly exhibited his works, and San Francisco.

In 1954, Maximilien Gauthier devoted a book to him published by "The Gemini." The first exhibition in Japan was in 1965. He was awarded the Grand Silver Medal by the City of Paris in 1957. Calogero had countless exhibitions in Paris, in the fifties, plus the American exhibitions in New York (Associated American Artists, 1952), Los Angeles (James Vigevano Galleries, 1953), and then later in Japan and in major galleries in Italy. He lived and worked for many years in Paris and Italy. He died in 2001.

(Biography provided by Allinson Gallery, Inc.)
Applied Filters1 result
Creator:Jean Calogero
1
to
Item Location
1
1
1
1
1
1
1
1
8
5,188
2,193
1,592
1,558
Jean Calogero, Surreal Fantasy Painting of Venetian Masks
By Jean Calogero
Located in Bridgeport, CT
A tower of a figure with Venetian masks on a floral base with a nest of tiny lights above, all set in a piazza with street lights. The top figure wearing a wide hat. Signed lower lef...
Category

Related Items
Jean Salabet Oil on Board of a Seascape at Night
By Jean Salabet
Located in Bridgeport, CT
Category 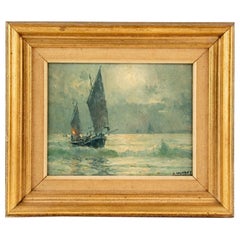 Jean Salabet Oil on Board of a Seascape at Night 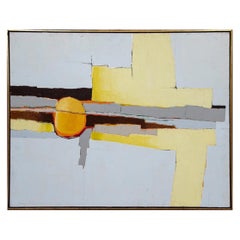 Very Large Vintage Oil on Canvas of a Seated Nude

School of Rembrandt Oil on Canvas Portrait of a Young Noble
Located in Bridgeport, CT
Category

School of Rembrandt Oil on Canvas Portrait of a Young Noble

Furniture by Jean Calogero is available for sale on 1stDibs. In our collection of Jean Calogero Furniture there are many options to choose from, although brown editions of this piece are particularly popular. In-stock we have 1 vintage editions of these items, while there is also 0 modern edition to choose from. Many of the original furniture by Jean Calogero were created in North America during the 20th century in the Mid-Century Modern style. If you’re looking for additional options, many customers also consider furniture by Lois Foley Furniture, Emerson Woelffer Furniture and Jan Stussy Furniture. Jean Calogero Furniture prices can vary depending on size, time period and other attributes. The price for these items starts at $3,800 and tops out at $3,800, while pieces like these can sell for $3,800 on average.