Jane Vivian was a British landscape painter who lived in London. She was known particularly for her views of Venice and exhibited several works at the Royal Society of British Artists, including views of Venice, Bruges and Rouen. She also exhibited at several provincial galleries, including the Royal Society of Artists, Birmingham, the Walker Art Gallery in Liverpool, Manchester Art Gallery and the Royal Hibernian Academy. She came from a dynasty of topographical artists who worked and lived in England. Vivian first exhibited a view of Venice from a London address in 1869 and continued to exhibit mainly Italian views until 1877. Around 1880, she seems to have moved, as did her father, as their next exhibiting address was Islington Row, Birmingham, where she continued to exhibit work until 1888. The name J.V. de Fleury reappears at the Birmingham Society exhibitions in 1892 and 1893. Her work shows attention to detail that is a reflection of her father's technique, but there is a lightness of touch and softness in the palate, which is considered even finer.

"Moonlight Over Venice" by Jane Vivian 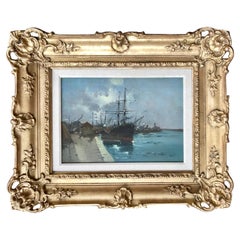 "The Harbor in Moonlight" by Eugene Galien-Laloue 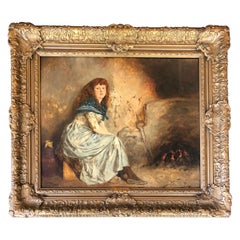 "Warming by the Fire" by Charles Green

"Morning Mist" by James Brereton
Located in Wiscasset, ME
Category

"Still Life of Flowers" by F. Clairval
Located in Wiscasset, ME
Category

"Barque at Sea" by George Shaw
Located in Wiscasset, ME
Category

"Barque at Sea" by George Shaw

"Shipping off the Coast" by Severin Nilsson
Located in Wiscasset, ME
Category

"Shipping off the Coast" by Severin Nilsson

"A Good Vintage" by Pompeo Massani
Located in Wiscasset, ME
Category

"A Good Vintage" by Pompeo Massani

H 24.02 in. W 38.19 in. D 2.37 in.
Venetian Canal by British Artist Jane Vivian
By Jane Vivian
Located in Wiscasset, ME
Jane Vivian was a landscape painter who lived in London. She is known particularly for her views of Venice and exhibited a number of works at the Society of British Artists, includin...
Category

H 27 in. W 37 in. D 3 in.
Antique Oil Painting Koblenz Street Scene Jane Vivian 19th C
By Jane Vivian
Located in London, GB
This beautiful oil on canvasboard painting by Jane Vivian (Active 1869-1890) beautifully captures a Koblenz, Street Scene and is signed lower left. It is housed in it's original a...
Category