James Whitelaw Hamilton was a Scottish artist, member of the Glasgow School of Art, the Royal Scottish Academy (RSA) and the New English Art Club. He was born in Glasgow, where he studied before moving to Paris, where he became a pupil of Aimé Morot and Pascal Dagnan-Bouveret. Returning to Scotland in 1884, he spent time at Cocksburnpath with other future Glasgow boys — James Guthrie, Joseph Crawhall and Arthur Melville. In 1887, he was elected a member of the New English Art Club, exhibiting at their annual exhibitions in London. He also showed regularly with the Glasgow Institute of the Fine Arts, of which he was the honorary secretary for many years. He became an associate of the Royal Scottish Academy in 1911, and a full academician in 1922. He was also a member of the Royal Scottish Society of Painters in Watercolour. In 1897, he won a gold medal at the Munich International Exhibition, which led to several overseas commissions, including one from Victor Emmanuel III of Italy, who appointed him a Cavaliere of the Order of the Crown of Italy in 1901. Hamilton's work was shown in the British Pavilion at the Venice Biennale at all eight biennales between 1897 and 1910. In 1897, 1899 and 1901, he was part of the Scottish artists' section of the exhibition. 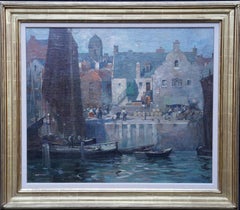 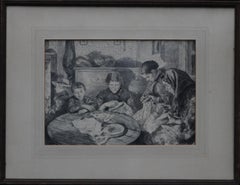