Herbert Bayer was an Austrian and American graphic designer, painter, photographer, sculptor, art director, environmental and interior designer, and architect. He was born in 1900 and died in 1985, at the age of 95. Bayer apprenticed under the artist Georg Schmidthammer in Linz. Leaving the workshop to study at the Darmstadt Artists’ Colony, he became interested in Walter Gropius’s Bauhaus manifesto. From 1921 to 1923 he attended the Bauhaus in Weimar, studying under such teachers as Wassily Kandinsky, Paul Klee and László Moholy-Nagy, Gropius appointed Bayer director of printing and advertising. From 1925 to 1928 (moving in 1926 to Dessau, its second location), Bayer taught advertising, design, and typography, integrating photographs into graphic compositions.

In 1928, Bayer left the Bauhaus to become art director of Vogue magazine’s Berlin office. He remained in Germany far later than most other progressives. In 1936, Bayer designed a brochure for the Deutschland Ausstellung, an exhibition for tourists in Berlin during the 1936 Olympic Games - the brochure celebrated life in the Third Reich, and the authority of Hitler. However, in 1937, works of Bayer’s were included in the Nazi propaganda exhibition “Degenerate Art”, upon which he left Germany. Upon fleeing Germany, he traveled in Italy.

In 1946 the Bayers relocated from New York. Hired by industrialist and visionary Walter Paepcke, Bayer moved to Aspen, Colorado as Paepcke promoted skiing as a popular sport. Bayer’s architectural work in the town included co-designing the Aspen Institute and restoring the Wheeler Opera House, but his production of promotional posters identified skiing with wit, excitement, and glamour. 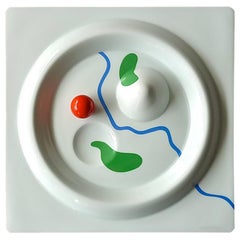 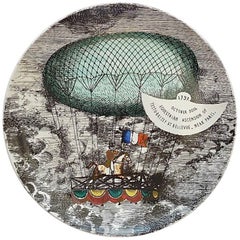 Artist's Maquette for the Articulated Wall Sculpture by Herbert Bayer

H 32 in. W 32 in. D 1 in.
Herbert Bayer Surrealist Christmas Card: Happy 1973
By Herbert Bayer
Located in New York, NY
A unique piece of ephemera by a Bauhaus master. Bayer's X-mas card for 1972. It reads: Merry Christmas and Happy 1973 Joella and Herbert Bayer. A photostat created from one of his m...
Category

Herbert Bayer furniture is available on 1stDibs for sale. These distinctive objects are often made of ceramics and are designed with extraordinary care. There are many choices to choose from in our Herbert Bayer furniture collection, although gray editions of this piece are particularly popular. In-stock we have 3 vintage editions of these items, while there is also 0 modern edition to choose from. Many of the original furniture by Herbert Bayer were created in Europe during the 20th century in the Mid-Century Modern style. Prices for Herbert Bayer Furniture can vary depending on size, time period and other attributes. Priced at $1,475 on 1stDibs, these items top out at $3,340, while pieces like these can sell for $2,385.