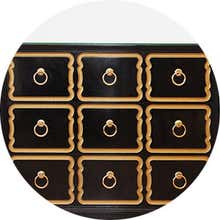 Founded in 1945, Henredon is one of the more recently minted of the top-tier North Carolina furniture makers. Among collectors, Henredon is admired both for its sleek, sexy furniture of the 1970s and for its partnerships with noted designers, a program that started in the 1950s with decorating icon Dorothy Draper and architect Frank Lloyd Wright.

From the start, Henredon — the brand name is a portmanteau term, derived from the first names or initials of three of the company’s founders — has been best known for its vintage case pieces, such as cabinets, dressers, armoires and credenzas. Though not on the cutting edge stylistically, the company’s production has always kept pace with contemporary tastes. In 1953, Henredon began a collaboration with Dorothy Draper, famed for bravura interior design commissions such as the Fairmont Hotel in San Francisco and the Greenbrier resort in West Virginia. Her taste for bold, modernized historical style is reflected in the incised baroque medallions of her España line and the geometric motif of her Viennese furnishings group.

In 1955, Henredon launched the Taliesin Ensemble by Wright, named after the architect’s houses in Wisconsin and Arizona. The pieces are recognizable by their angular shapes a dentil motif on their edges. In those years, Henredon had a cross-licensing agreement with the Heritage furniture company, and Draper and Wright furniture is usually labeled Heritage-Henredon.

In later decades, Henredon produced collections for such designers as Ralph Lauren and Laura Ashley. The company took a stylish turn in the 1970s, fabricating new and unusual forms like mirrored room dividers and console tables with rounded corners and burl-wood veneers. Such pieces are priced in the $3,000 to $4,000 range, as are chests of drawers by Draper. Wright furniture tends toward the higher end, priced around $7,000. As you will see on 1stDibs, Henredon was an aesthetically diverse maker, but its furniture commands attention and makes a statement in any eclectic decor.

Pair of Walnut Chippendale Beveled Glass Mirrors with Gold Gilt Trim by Henredon
By Henredon
Located in Toledo, OH
A great pair of 46" tall walnut Chippendale mirrors by Henredon. Shaped tops are adorned with central gold gilt ornament and continues at edge to frame the beveled glass mirror. This...
Category

Pair of Burled Olive and Oak Chests by Henredon
By Henredon
Located in Hudson, NY
A beautiful pair of vintage 1960's large chests by Henredon, with cases of bleached oak and the drawer fronts in burled olive wood. very nicely made with excellent cabinetry work. th...
Category

Pair of Burled Olive and Oak Chests by Henredon

Pair of Henredon Burlwood Bachelor's Chests or Nightstands
By Henredon
Located in Rio Vista, CA
Stunning pair of low bachelors chests or nightstands made by Henredon's Scene Two collection. The chests feature a burl olive wood on the front of the drawers and an ash hardwood cas...
Category

Vintage Pair of Blush Pink Tuxedo Club Chairs
By Henredon
Located in Wilton, CT
These chairs were made by Henredon in the 1960s. Originally they had P-shaped arms. When stripped a lot of rolled cotton was exposed then removed. This achieved a more angular look. ...
Category

Henredon Furniture Dresser in the Style of Gio Ponti
By Gio Ponti, Henredon
Located in Philadelphia, PA
Henredon Furniture 5-drawer dresser. Gio Ponti Inspired dresser, done in the style of his Singer Furniture Line. I've searched high and low and found no other piece quite like it! Pr...
Category

Henredon Furniture Dresser in the Style of Gio Ponti

Custom Upholstered Sofa in Striped Silk Fabric by Scalamandre
By Henredon
Located in Charleston, SC
Salon sofa by Scalamandre by Henredon, and custom upholstered by Scalamandre in silk Simbolo stripe fabric with contrasting cord and antique brass nailheads. The sofa has a tufted bu...
Category

Mid-Century Modern Henredon Boucle Faux Shearling Chair
By Henredon
Located in West Hartford, CT
Featuring new boucle faux shearling and pink, yes pink, legs, is this Henredon spoon back chair. Iconic midcentury lines throughout and the fabric is to die for. Now, more than ever,...
Category

1970s French Style Burl Walnut Secretary Cabinet by Henredon
By Henredon
Located in Kennesaw, GA
This is a lovely French style heavily carved burl walnut secretary by Henredon. The top half has two glass shelves and does light. It is in very good condition and is marked.
Category

Pair of Henredon Mid-Century Asian Style Night Stands/Side Tables
By Henredon
Located in Sarasota, FL
This special almost pair of night stands / side table cabinets (one is wider than the other. brass trim pulls one drawer each and 2 doors to the bottom in the style of Asian Mid-Cen...
Category

1980s Henredon Scene Two Burl Wood and Glass Display Cabinets, a Pair
By Henredon
Located in Farmington Hills, MI
We are very pleased to offer a chic, stunning, burl wood set of display cases from the Scene Two Collection by Henredon, circa the 1980s. This gorgeous set is crafted in a warm olive...
Category

1970s Faux Malachite Asian Style Cabinets By Henredon -A Pair
By Henredon
Located in Kennesaw, GA
This is a wonderful pair of mirrored Asian style cabinets by Henredon. The green faux malachite finish is original. The backs are mirrored and shelves are adjustable. The pieces are ...
Category

Burled Walnut Round Pedestal Storage Stand or Table by Henredon
By Henredon
Located in Toledo, OH
An exceptional round burled walnut pedestal table by Henredon. This beautiful piece features a single door and an adjustable shelf. Very good condition with the original finish. Beau...
Category

Burled Walnut Round Pedestal Storage Stand or Table by Henredon

Hollywood Regency Ivory Lacquer Table Base by Henredon
By Henredon
Located in Atlanta, GA
Late 20th century faux goatskin table base of ivory lacquer made in the Hollywood Regency chinoiserie style. The table bears a label from its maker, Henredon. (For reference, the tab...
Category

Henredon Tall Dresser in the Style of Gio Ponti

Henredon Furniture for sale on 1stDibs.

The Henredon furniture is available for sale on 1stDibs. These distinctive objects are often made of wood and designed with extraordinary care. There are many options in our Henredon Furniture collection, although brown editions of this piece are particularly popular. There are 227 vintage versions of these items in stock, while there is 0 modern edition to choose from as well. Many of the original Henredon furniture was created in the Mid-Century Modern style in North America during the 19th century. Many customers also consider Furniture by John Widdicomb Furniture, Paul Frankl Furniture and American of Martinsville Furniture if you are looking for additional options. Prices for Henredon furniture may vary depending on size, time period and other attributes. Priced at $260 on 1stDibs, these items top out at $24,200, while pieces like these can sell for $2,995.