Hartzell Harrison Ray was born in Kansas in 1896. Ray was a longtime resident of San Mateo, CA. He attended the University of Kansas in the 1900s. Reared in Kansas, he served in World War I and spent two postwar years teaching high school. He received his A.B. and M.D. from George Washington University and interned there and in Rochester. It was in the latter city that he met his charming wife, Anne, who was the supervising surgical nurse. The Rays were married in 1925 and had two children. Ray was one of the founders of the San Mateo Medical Clinic. He taught clinical pediatrics at the University of California Medical Center for 30 years. Retirement had given Ray more time for traveling. And because he was a representational marine artist, he was able to indulge in his passion for painting seascapes, particularly on the San Mateo County coast.

Hartzell Ray had never stopped learning. Monday afternoons were devoted to painting at the San Mateo County Fair building with Earl Pierce of the Peninsula Art Association. He was also sitting in as an observer in the docent course in Chinese art at the de Young Museum. Ray shied away from personal publicity, but his enthusiasm for art overcame his reticence to talk about himself.

"I started painting during World War II," Ray recalled. "I was making a house call in South San Mateo and, as I was returning along El Camino, I saw a fellow in the window of a big empty building painting. 'I’d like to do that,' I said to myself as I knocked on the door. It was answered by Mr. Polla, an itinerant artist, and I told him I wanted to learn to paint. 'Go uptown and buy the cheapest paints and brushes you can find,' he said, 'and come back tomorrow night.' And that's the way it started," Dr. Ray concluded with a smile. He was a member of the Foster City Art League and helped organize the Peninsula Art Association, where he served as its president and a member of the board of directors. 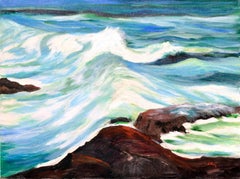 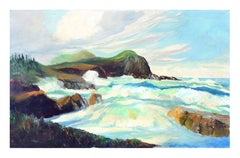 Wreck of the Samoa Off Point Reyes
By Edward J. Walters
Located in Soquel, CA
Category

Edward J. Walters
Wreck of the Samoa Off Point Reyes, 1960