Harris Strong was born in Waukesha, Wisconsin, in 1920. His aunt owned a greeting card company, and that influenced him to become an artist. He also had a strong scientific bent, so he was meticulous about the engineering of his tiles, which featured many innovations, when competitors were creating pie plates, in his dismissive works. During World War II, Strong was a cryptographer, working directly under General Douglas MacArthur. Afterward, he studied ceramics and the chemistry of ceramic glazes at North Carolina State University. Then he worked in Brooklyn, New York, at Kelby Pottery. Later, his own business took off. Strong had showrooms in Chicago, New York and Tokyo. He created a 30' long free-standing ceramic tile mural for the Waldorf-Astoria in New York City, which remains in place. One friend says he was the first to ever show art at a home furnishings show. He loved and sang Gilbert and Sullivan, collected stamps and played bridge. In 1970, Strong relocated to Trenton, Maine, but after a fire destroyed his glazes developed over 20 years, he shifted his focus to prints, serigraphs, woodcuts, etchings, engravings, collage and paintings. Strong died in 2006.

Large Scale Tile Work by Harris G. Strong
By Harris Strong
Located in Los Angeles, CA
This is a master work by the artist Harris G. Strong, circa 1960. The pieces measures 43" x 73". In the original wooden frame.
Category

Harris Strong Oversize Table Lamp
By Harris Strong
Located in Highland, IN
This large table lamp by Harris Strong features a base of rich walnut with vivid yellow/ orange inset enameled tiles. We are selling the lamp sans-shade, the original shade is in nee...
Category

Stunning Large Harris Strong Woman Tile Art B
By Harris Strong
Located in San Francisco, CA
A very large Harris strong ceramic tile art, subject is of a woman with long flowing hair, crew neck dress or shirt, with many squares behind her of many different colors. The tile ...
Category 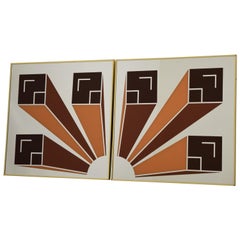 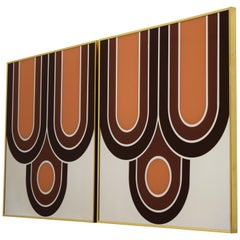 Trio Vase Suite by Aldo Londi for Bitossi for Raymor

Set of 4 Dining Chairs by Broyhill for Saga
By Broyhill
Located in South Charleston, WV
Category

Set of 4 Dining Chairs by Broyhill for Saga

H 11.5 in. W 11.5 in. D .75 in.
Midcentury Harris Strong Cubist Ceramic Tile Portrait of a Lady
By Harris Strong
Located in Saint Louis, MO
Harris Strong Mid-Century Modern portrait of a lady executed in ceramic tiles, framed, label on reverse side. Want to see more beautiful things? Scroll down below and click "View All...
Category

H 44 in. W 19 in. D 3 in.
Monumental Harris Strong Manhattan Scene
By Harris Strong
Located in Brooklyn, NY
This Harris Strong New York cityscape plaque features glazed ceramic tiles against a walnut board. This extraordinary piece is large in scale and is a magnificent example of the seri...
Category

H 41 in. W 9.6 in. D 1.25 in.
Harris Strong Ceramic Wall Art
By Harris Strong
Located in Palm Springs, CA
Thirteen ceramic tiles placed together to make this fantastic piece of art by Harris Strong. The colors and shading make this 3D like, one feels almost as if you could walk into the...
Category

H 21 in. W 37 in. D 1.25 in.
Outstanding And Rare Harris Strong Tile And Walnut Clock Mid-century Modern
By Harris Strong
Located in Pemberton, NJ
Outstanding and rare clock made by Harris Strong. Lovely shades of blue and green tiles strips have been used to create this amazing clock. This is one of those 8 day wind up clock...
Category