Giacomo Balla was born in Turin in 1871. Since he was a young boy, when he began to attend the Accademia Albertina, he dedicated his studies to the violin and painting. His first artistic accomplishment dates back to 1894, a self-portrait. In 1895, Balla moved to Rome with his mother and then in 1900, he moved to Paris for several months. His early years as a painter indicate an interest in the divisionist paintings of Giuseppe Pellizza da Volpedo and Giovanni Segantini, Impressionism and French Post-Impressionism. In 1910, together with his pupils Gino Severini and Umberto Boccioni, he signed the Manifesto of the Futurist Painters. It is in 1912, with works of art such as the famous Dynamism of a Dog on a Leash, that Balla’s art begins to show clear futuristic characteristics, demonstrating a special focus for the objective analysis of detail. Also in 1912, Balla made a provocative gesture with which he auctioned off all of his artwork and declared himself dead, still famous, the phrase pronounced on this occasion, “Balla is dead. Here are sold the works of art of the late Balla,” that marks the clear intention of the artist to deny himself and provoke the public, pushing him towards a reexamination of the values of art. Between the end of 1912 and 1914, the artist painted the Iridescent Compenetration, paintings in which the abstractionism of the composition and the geometry of the shapes prevail. In 1915, together with Fortunato Depero, he signed the Manifesto of the Futurist Reconstruction of the Universe. Towards the end of the Thirties, Balla’s futurist production was always more sporadic; the artist gradually returned to a more figurative painting. During his last years, Balla painted according to a realistic naturalism, that however, even if occasional, he had never completely abandoned.

Contrast of Lights - Portrait of Elica Balla - Oil on Panel by G. Balla - 1941
By Giacomo Balla
Located in Roma, IT
Oil painting on Board realized by Balla as portrait of his second daughter Elica. A beautiful, top quality portrait among the most beautiful of his figurative painting. It include...
Category

Pair of Placeholders - Original Tempera on Wood by Giacomo Balla - 1930s
By Giacomo Balla
Located in Roma, IT
The 'Placeholder White and Red' by Giacomo Balla (1871-1958), with white red space lines recto and geometric pattern with red and white triangles verso, realized in the 1930s. Temp...
Category 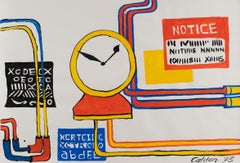 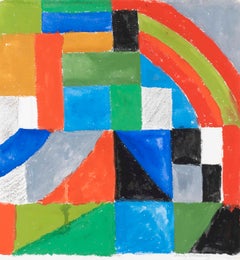