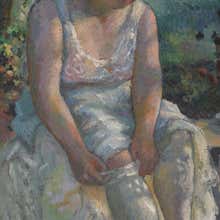 Georges-Henri Pissarro, better known as Manzana, was born in Louveciennes, the third of Camille Pissarro and Julie Vellay’s seven children.

He studied with his father from a very early age and, like Lucien — Camille and Julie's eldest son — he spent his formative years surrounded by distinguished artists of the Impressionist movement, such as Monet, Cézanne, Renoir and Gauguin, all of whom frequented the Pissarro home. At his father's side he learned not only to handle brush and pencil but also to observe and to love nature.

Thus steeped in tradition and subjected to these diverse influences, Manzana turned out to be a prolific and versatile artist, producing work in oil, pastel and watercolour. As a young man he adopted his father's purely Impressionist style and produced a series of landscapes around Pontoise and Eragny. However, around 1906 he progressed beyond that and went in search of other means of expression via the design of furniture and decorative objects. The influence of Gauguin's exotic native scenes from Tahiti and Martinique certainly contributed to the development of Manzana's Orientalism, which at this time began to manifest itself in some of his paintings by his experimenting with gold, silver and copper paint.

Like all the second generation Pissarro artists, Georges initially worked under an assumed name. In 1894 he adopted "Manzana,” the family name of his maternal grandmother, and it was not until 1910, out of respect to his then-deceased father, that he employed his own family name when signing his work.

During the early 1900s Manzana regularly exhibited Impressionist works at the Salon d'Automne and the Salon des Indépendants, as well as Durand Ruel and Druet in Paris. In 1907 he had his first exhibition of decorative works at Vollard, but it was in 1914 that he had the most important exhibition of his career at the Musée des Arts Décoratifs, where he exhibited 311 works including tapestries, carpets, furniture, glassware, decorative paintings, etchings and lithographs.

Manzana continued to exhibit his work regularly until the late 1930s, splitting his time between Les Andelys and Paris, although spending several summers at Pont Aven in Brittany, where the local costume and lifestyle inspired a series of paintings in the 1930s. At the declaration of war in 1939, he moved with his family to Casablanca, where he stayed until 1947.

Manzana was married and widowed three times. He spent the last years of his life with Félix, his youngest son who was also an accomplished artist, in Menton, returning to the Impressionist tradition and painting the local landscape. 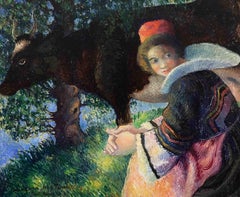 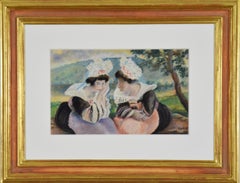 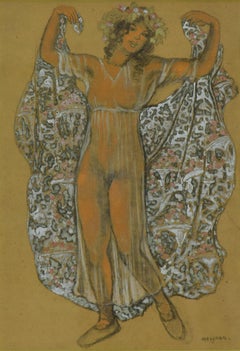 H 29.53 in. W 27.56 in. D 3.15 in.
Herring Season - Boulogne
By Georges Henri Manzana Pissarro
Located in Marlow, Buckinghamshire
Oil on panel. Signed lower left. Framed dimensions are 21 inches high by 34 inches wide. Georges Manzana-Pissarro was the second son of Camille Pissarro and was also taught by him. ...
Category