Georges Antoine Rochegrosse was born to Élise Marie Bourotte (1828–1904) and Jules Jean Baptiste Rochegrosse, who died in 1874. In 1875, his mother remarried with poet Théodore de Banville, of which Georges-Antoine became the adopted son. He frequented the artists and authors his stepfather received at his home, Paul Verlaine, Mallarmé, Arthur Rimbaud, Victor Hugo and Gustave Flaubert. He began his training as a painter with Alfred Dehodencq, then entered the Académie Julian in Paris in 1871, in the workshops of Jules Joseph Lefebvre and Gustave Boulanger and he ended his studies at the École Nationale Supérieure des Beaux-Arts in Paris. At the beginning of his career, he practiced history painting and symbolist art. Recognized as a painter and appreciated by good society, Rochegrosse was appointed the Knight of the Legion of Honor in 1892. Then, he turned to Orientalism by discovering Algeria in 1894, where he met Marie Leblon, whom he married in 1896. She was the love of her life, his wife, his muse and his model. He settled with his wife in El Biar, on the outskirts of Algiers, in 1900. He made the trip to Paris each summer, where he was a member of the jury of the Société des Artistes Français. In 1910, Rochegrosse commissioned a workshop, Dar es Saouar, where he received his students. The same year, he was promoted to officer of the Legion of Honor. He was admired by his contemporaries, in particular his stepfather Théodore de Banville or Conan Doyle. He was deeply affected by the First World War and the death of his wife in 1920 following an illness contracted at the hospital in Algiers, where she was a nurse. Inconsolable, he goes so far as to add Marie's M to his signature. 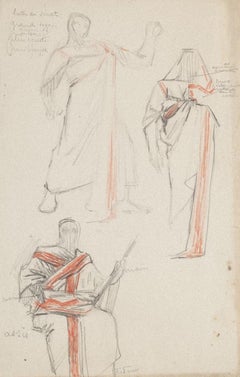 Studies for Costumes -Pencil and Pastel by G. A. Rochegrosse -Early 20th Century
By Georges Antoine Rochegrosse
Located in Roma, IT
Category 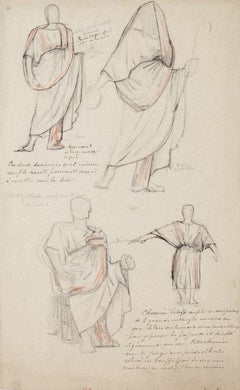 Georges Antoine Rochegrosse
An allegory of the Angel Gabriel, A triptych 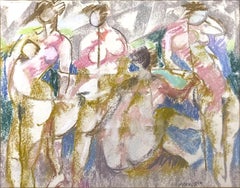