Frederick Judd Waugh was born into an artist's family.  His first teachers were his father, Samuel B. Waugh, a respected Philadelphia portrait painter, and his mother, Mary Eliza Young Waugh, a miniaturist.  With encouragement from his parents, he attended the Pennsylvania Academy of the Fine Arts, where he studied with Thomas Eakins and Thomas Anshutz.  After three years, he left for Paris, where he entered the Académie Julian and studied under Adolphe William Bougereau and Tony Robert-Fleury.  In 1883, while he was still a student, his work was accepted for the Paris Salon.  His father's death in 1885 brought him back to the United States, where he spent the next seven years doing commercial work and painting some portraits.  In 1892 he returned to Paris.

Although Waugh was very versatile and accomplished in depicting a variety of subjects, it was his marine paintings that brought him critical attention.  Visiting Sark Island in the English Channel in 1893, he began to study water, rocks, and sky, often battling the elements to paint en plein air.  By 1895, Waugh had set up his studio in the English coastal town of Saint Ives, Cornwall, where J. M. W. Turner had painted eighty years earlier.  A large window in the studio provided an intimate view of the ocean, and he could continue his intensive study of waves in greater comfort.  His wave paintings have been referred to as majesty in motion.

Waugh remained in England for twelve years, working as an illustrator for various newspapers and magazines in London, and returning to Saint Ives to paint when time allowed.  In 1907, Waugh returned to the United States, eventually settling in Provincetown, Massachusetts.  He was elected a member of the National Academy of Design in 1911.  For five consecutive years he was voted the favorite artist of the prestigious Carnegie International Exhibition in Pittsburgh.

Waugh was known to have painted up to ten canvases a month to keep up with the demand for his work. The United States government called on him to help camouflage the naval fleet in World War I.  Fittingly, upon his death, he was buried on the New England coast within sound and sight of the sea.

The Clan of Munes
By Frederick Judd Waugh
Located in Minneapolis, MN
On offer is an important avant-garde painting, acquired from the descendants of the artist Frederick Judd Waugh, which is stylistically in keeping with his work for "The Clan Of Mune...
Category 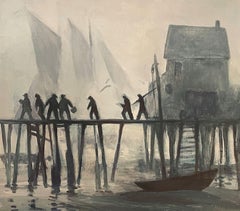 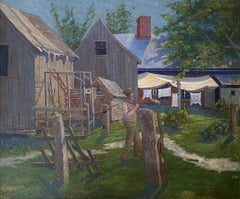