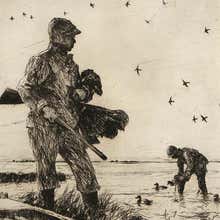 Frank Weston Benson, well known for his American Impressionist paintings, also produced an incredible body of prints — etchings, drypoints and a few lithographs. Born and raised on the North Shore of Massachusetts, Benson, a natural outdoorsman, grew up sailing, fishing, and hunting. From a young age, he was fascinated with drawing and birding — this keen interest continued throughout his life. His first art instruction was with Otto Grundman, at the Museum of Fine Arts in Boston, and then in 1883 in Paris at the Académie Julian, where he studied the rigorous “École des Beaux-Arts”’ approach to drawing and painting for two years.

During the early 1880s, Seymour Haden visited Boston, giving a series of lectures on etching. This introduction to the European etching revival inspired Benson. He purchased a copy of Maxime Lalanne’s “A Treatise on Etching” and used it as a guide into the nuances of the craft. Benson's first etching was done in 1882. Titled “Salem Harbor,” it was published in “The Art Student,” the school magazine at the Museum of Fine Arts. Almost three decades would pass before Benson’s busy schedule allowed his fascination with etching and dry-point to weave its way back into the daily structure of his life. He produced over 350 different prints before his death in 1951. In a letter to his grandson, Frank Benson noted, “I have been happy because my hobby and my work are one and the same, and if you can arrange the same thing in your life, you will be equally happy.” 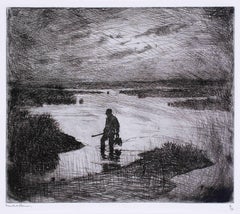 Plan of Louisville, KY. and the Vicinity.
Located in New York, NY
Category 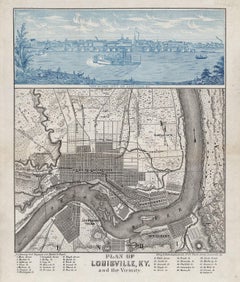