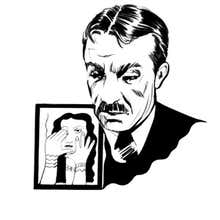 A painter as well as a filmmaker, illustrator, stage-set designer, ceramicist and printmaker, Fernand Léger was one of the most prolific artists of the first half of the 20th century. His early mature work as a Cubist was marked by the use of bold colors and contrasts and a visual vocabulary inspired by industrial technology. In his later career, Léger turned to idiomatic, almost naïve depictions of human figures, in a belief that his work should be accessible to ordinary people and relevant to their lives.

Born in Normandy, the son of a cattle trader, Léger worked as an architectural draftsman in Paris while studying art. By 1908 he was a member of an artistic circle that included Marc Chagall, Robert Delaunay, sculptor Jacques Lipchitz, and the poet Guillaume Appolinaire, and through them he became connected to the Cubists. As opposed to the flat planes and neutral hues seen in the paintings of Pablo Picasso and Georges Braque, Léger’s Cubist abstractions were devised with vivid colors and forms that had dimensionality. Soon after his army service in World War I — he was gassed at the Battle of Verdun — Léger entered his “mechanical” period. Convinced that technology would improve the human condition, he painted compositions of tubular shapes and cylinders that are reminiscent of machine parts. In other work, Léger sought to capture the bustle and brio of modern life with references to railroad stations, factories, street signs and billboards.

Léger had also emerged from the trenches with a deep concern to make his art engage the sorts of men and women he had met during the war. He sought to bring his work to a wider audience through film, theater sets and book illustrations. In the 1920s, influenced by Purism — a variant on Cubism that promoted a simpler and more direct approach to forms and compositions — Léger produced a series of paintings depicting everyday objects: a soda siphon, an accordion, a guitar and vase. The human figure returned to his work. By 1930, pure abstraction disappeared almost completely from Léger’s art in favor of simple studies of people. Their boldly outlined forms, placed against a bright background, can be regarded as an assemblage of parts — yet in these representations of dancers, acrobats and folks on bicycles, Léger seems to be articulating a kind of kinship and affection. You will see from the works on offer why Fernand Léger is often regarded as the warmest and most humane of the great modern artists.

Fernand Léger
The Couple - Lithograph Signed in the plate, 1955

La Pompe a Essence (Fuel Pump) From the Series "La Ville"
By Fernand Léger
Located in New York, NY
Medium: Lithograph, 1959 Arches Paper - Good Condition A This lithograph by Fernand Leger is from the portfolio entitled "La Ville" (The City) which consists of 29 lithographs fea...
Category 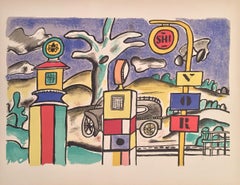 Les Deux Amoureux, Musee de Lyon, Lithograph, 1955
By Fernand Léger
Located in New York, NY
"Colour is a human need like water and fire. It is a raw material indispensable to life" - Fernand Leger This gorgeous lithographic poster advertising the opening of an exhibition...
Category

Fernand Léger
The petrol station, The etude for the city Paper, lithograph 2/300, 34x45cm

Sculptures Polychromes by Fernand Leger - modern lithograph (abstract parrot)
By Fernand Léger
Located in New York, NY
This lithographic poster featuring the image of Fernand Leger's color lithograph 'The Parrot' was used for the 1953 exhibition of colored sculptures by the artist at the Galerie Loui...
Category

"Les Loisirs Sur Fond Rouge" Lithograph Red Blue Yellow and Green
By Fernand Léger
Located in Detroit, MI
This brilliant colored lithograph on paper is the perfect example of Leger's populist style. It captures his bold use of color to depict the leisure activities of the working-class. ...
Category

From the Series "La Ville"
By Fernand Léger
Located in New York, NY
This lithograph was printed at the Atelier Mourlot in Paris in 1959 and is a part of the "La Ville" portfolio. It is annotated "Epreuve de l'atelier Mourlot / Lith. de F. Leger" bene...
Category

Still Life - Original Lithograph by F. Léger - 1951
By Fernand Léger
Located in Roma, IT
Still Life is an original color lithograph realized by Fernand Léger (1881-1955) and published by éditions Falaize, Paris, 1951. With the additional values of the blue ink signatu...
Category

Le Cirque.
By Fernand Léger
Located in New York, NY
LÉGER, Fernand. Le Cirque. Illustrated with 75 lithographs by Léger, of which 33 are printed in colour and 42 in black (unsigned). Folio, 440 x 340, bound in a recent cloth chemis...
Category

Fernand Leger-Museum Morsbroich-12.5" x 9.25"-Lithograph-1959-Modernism
By Fernand Léger
Located in Brooklyn, NY
Printed by Mourlot for ‘Art in Posters" by Sauret (1959) after the original poster #35
Category

Fernand Leger-Nature Morte Au Pomme-19.25" x 22.5"-Poster-Modernism-Multicolor
By Fernand Léger
Located in Brooklyn, NY
Offset lithograph on Stonehenge Paper, the print is signed in the plate by F.L. (Fernand Leger). This is a reproduction of the original lithograph made in 1948. This was printed by A...
Category

Head and Plant
By Fernand Léger
Located in New York, NY
Lithograph titled Head and Plan by Joseph Fernand Henri Leger, signed F.L. in the plate. Leger was a French painter, sculptor, and filmmaker. In his early works he created a personal...
Category