Born in 1810, Ferdinand Barbedienne started at 30 Boulevard Poissonnière in Paris, one of the most famous 19th-century artistic bronze casting companies. In addition to his production, he worked for famous artists such as Auguste Clésinger, Albert-Ernest Carrier-Belleuse and Louis Barrias. At the London Universal Exhibition of 1851, Barbedienne’s firm won two Council medals. At the 1855 Universal Exhibition, he won a medal of honor and eleven cooperator’s medals for the work of his co-workers, such as his model designer Louis-Constant Sévin (1821–88) and his chaser Désiré Attarge (1820–78). Attarge won the Crozatier Prize in 1862 and 1864, which was awarding the France best chaser, and was once again awarded at the 1867 Universal Exhibition with a silver medal as Barbedienne’s co-worker. Jury’s report was then very explicit, “It’s impossible to show more taste in composition and more maestria in the making of these leaves and elegant flowers, all chased with so extreme delicacy." The success of Barbedienne’s firm brought him many official commissions, such as in 1860, as Barbedienne supplied bronzes for furniture for the Pompeian Villa of Prince Napoleon, located avenue Montaigne in Paris. Barbedienne’s production was always highly esteemed and he was, himself admired by contemporary art critics who compared him during the 1878 Universal Exhibition to a prince of industry and the king of bronze-casting. His glory did not decline with the passage of time at the Universal Exhibition of 1889; the critics thanked Barbedienne for the example he set for other bronze-casters by the perfection of his bronzes. Louis-Constant Sévin (1821–88) was first trained to design and sculpt with the sculptor Antoine-André Marneuf (1796–1865). In 1839, he went into partnership with two sculptors, Phénix and Joyau, and he created designs for famous goldsmiths such as Denière, Froment-Meurice and Morel. He fled to London during the 1848 Revolution, where he worked at Morel, with whom he exhibited artworks at the 1851 Universal Exhibition. Back in France, he took part in the 1855 Universal Exhibition by creating designs to the Limoges porcelain makers Jouhanneaud and Dubois. Since then, he worked as a head decorator at Ferdinand Barbedienne’s Company. He produced a lot of works: he designed the bronze decoration for the Paiva’s Hotel (on the Champs-Elysées avenue) and created models for Barbedienne. He participated in different exhibitions and was awarded at the 1862 London Universal Exhibition for the artistic excellence of the furniture items he designed and which are exhibited by Barbedienne. He also received a Gold Medal as a collaborator at the Central Union of Decorative Arts Exhibition in 1863. Barbedienne died in 1892. 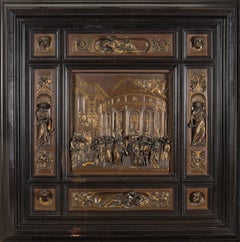 Ferdinand Barbedienne
The Story of Joseph after Lorenzo Ghiberti's “Gates of Paradise," Florence 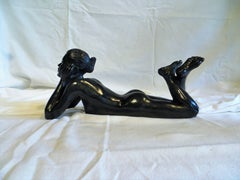 The Valnurese
By Elisabeth Cibot
Located in Pasadena, CA
Category 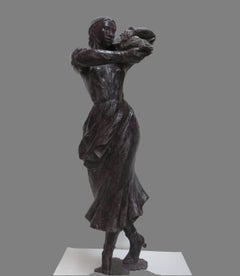