Eugenie Baizerman was one of America's earliest Abstract Impressionists. Prior to immigrating to the United States in 1910, Baizerman's family lived in Bessarabia, a province of Russia and in the city of Odessa in the Russian Ukraine. The surname she received at birth, changed to Silverman upon her arrival in America, remains unknown. Baizerman's mother, an actress and her father, a language teacher, began nurturing her artistic skill during childhood. They initially hired an artist to coach her individually. She was later admitted to the Odessa Art School. After moving to New York City, Baizerman continued her art education at the National Art Academy of Design, followed by the Educational Alliance. She became acquainted with Saul Baizerman, a Russian sculptor working as a model for the National Academy of Design, whom she later married. Baizerman's unique style of painting emerged from French Impressionism and evolved into form of expression. She used the subjects of her paintings - ordinary objects, landscapes and figures - as the basis for rhythmically combing thick, colorful brushstrokes in abstracted, harmonious compositions. A preference for working in isolation greatly affected Baizerman's career as an artist. Throughout her life, she was extremely shy. Also, during most of her adulthood, she dealt with respiratory problems caused by partially psychosomatic asthma. In order to avoid potentially stressful situations that aggravated her condition, she refrained from actively promoting herself and her artwork. It was on rare occasion that she allowed the inclusion of her work in public exhibitions. For these reasons, knowledge of her work was kept to a minimum. Before her death in 1949, which was attributed to her respiratory illness, the extent of Baizerman's public involvement was limited to two shows. The first, held in 1939, was a solo display. The second was in conjunction with her husband's sculptural work closer to the time of her death. Baizerman's artwork remained unexposed for nearly 12 years until a collection of paintings, which had been in Saul Baizerman's possession prior to his death in 1957, were displayed to the public. The exhibition, held in 1961 by the Artists Gallery of New York City, resulted in the acquisition of her work institutions including the Museum of Modern Art and the Whitney Museum of American Art in New York. 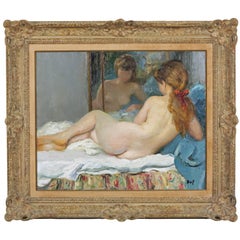 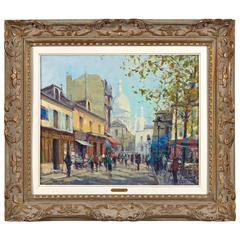 “Waiting for the Catch” by Robert Gallon

Landscape with Figures by Gaston Sebire