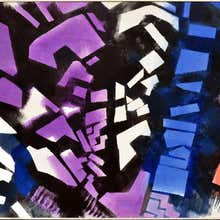 Erle Loran was born in Minneapolis, Minnesota, in 1905. He attended the University of Minnesota for a while before studying at the Minneapolis School of Art, under Cameron Booth, and graduated in 1926. Loran was awarded a traveling scholarship from the Chaloner Foundation (Paris Prize) after graduation and spent the next four years in Europe, living in Cézanne’s studio. Loran had always been fascinated by the work of the artist Paul Cézanne, and it motivated him throughout his life both in his painting and writing. He would later pen several books and articles based on his time spent in what was once Cézanne’s world. Once he returned home, Loran moved to California and began not only painting and continuing his art career, but also took up teaching at the University of California, Berkeley. He served as chairman of the art department from 1952–56 and continued teaching there until his retirement in 1973, where he was awarded a University Citation. Berkeley once again awarded Loran, this time in 1981, declaring him an Emeritus Professor.

During the 1940s, Loran belonged to a group of some 20 artists that produced lithographs for the “Chronicle Contemporary Graphics” project. Around the same time, he published two books (one of which was the successful Cézanne Composition) and two articles in art magazines the following decade. By the late 1960s, Loran had changed focus and began painting more abstract images, fusing Op Art, Pop Art and Hard Edge. Perhaps his new direction was influenced by his time spent in New York learning under the artist Hans Hoffman, an artist from Europe who was heavily interested in bringing modern European techniques and philosophies to America. Loran was eventually hindered by visual impairment but continued painting until about a year before his death. He passed away in Berkeley, California, in 1999.

Navajo Hunters
By Erle Loran
Located in Soquel, CA
Dynamic, multi colored abstract by Erle Loran (American, 1905-1999). Depicts a group of hunters and their horses participating in a hunt with colorful abstract landscape and hills in...
Category

Mountains and High Desert Abstracted Landscape
By Erle Loran
Located in Soquel, CA
Modernist Abstract painting of the Mountains and John Day Painted Desert in Oregon by Erle Loran (American, 1905-1999). Erle Loran was a modernist of urban and coastal views and geom...
Category

Flat Top Mountain Abstracted Landscape
By Erle Loran
Located in Soquel, CA
Gorgeous burst of blue behind a flat top mountain with splashes of orange by Erle Loran (American, 1905-1999). Erle Loran was a modernist of urban and coastal views and geometric pai...
Category

Sunrise Glow on the Bay Abstracted Landscape
By Erle Loran
Located in Soquel, CA
Gorgeous colors in this abstract of the sunrise on the bay by Erle Loran (American, 1905-1999), a modernist of urban and coastal views and geometric painting. Signed on verso. Presen...
Category