Edward Marecak was an American painter who was born in 1919. Growing up in the farming community of Brunswick, Ohio, he showed early artistic promise, hired by the National Youth Administration to document historic barns. In 1946, Marecak came to the Colorado Springs Fine Arts Center for a year and after a semester interlude at Cranbrook returned to study lithography with Lawrence Barrett. There he also met his future wife and sometime collaborator, ceramicist Theresa Madonna Fortin. Given the opportunity to teach a summer course at the University of Colorado, he decided to obtain a teaching certificate at the University of Denver and subsequently embarked on his 25-year career in the Denver Public School system. Rather than pursue fame, Edward Marecak directed his zeal toward fostering younger generations in the principles of art as well as his simple philosophies. Moreover, his teaching salary allowed him to ply his prodigious talent at whatever he pleased, instead of bending to the dictates of trends and sales. Having inherited his faith in education from his Slovakian immigrant parents, Marecak could add the shaping of lives to his mastery of art forms, including lithographs, monoprints, drawings, hooked rugs, ceramics, paintings, wood sculptures, stained-glass windows and jewelry. While exhibiting in his lifetime, he was, in his wife’s words, “his own greatest collector”, but shows and his popularity at the Kirkland Museum have positioned Marecak posthumously among Colorado’s pre-eminent modernists. As a child, Marecak was enthralled by the Carpathian tales of magic and supernatural beings told by his grandmother. As with other artists with roots in Eastern Europe, his artistic turn to folk tradition would free him from learned practices of perspective and modeling in favor of flat patterns within patterns and brilliant, throbbing color. While others ventured further into abstraction, Marecak stylized figurative elements into crowded compositions that appeared like a mosaic or stained glass. As he matured, he could declare, “I am still very much a Byzantine designer and my joy with what color can do grows all the time”. The traceries of strong outlines and bold shapes provide compartments for vibrant colors, contrasts and rough textures that can scarcely be contained. The Kirkland Museum staged a retrospective of Edward and Donna Marecak in 2007. 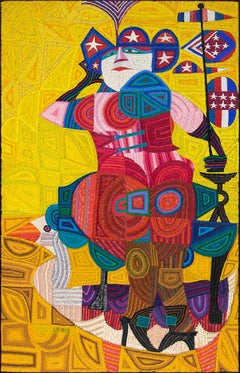 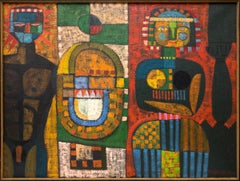 Witch and Warlock Casting Spells in the Upside Down World (Semi-Abstract)
By Edward Marecak
Located in Denver, CO
Category

Eurydice in the Elysian Fields
By Edward Marecak
Located in Denver, CO
Category