Edward Landon studied at both the Hartford Art School and the Art Students League. He was a pioneer in elevating silkscreen to the level of fine art and was one of the founding members of the National Serigraph Society. He served as president of the society and as editor of its publication, The Serigraph Quarterly. Landon was also a musician, and many of his subjects have the musical theme as their inspiration. In 1950, he was awarded a "Fulbright" grant to study in Norway, where he lectured on serigraphy and arranged exhibitions of the serigraph. Landon was widely exhibited at many of the leading museums, including the Metropolitan Museum of Art.

Edward Landon
Things are not Right!, 1970

Arrangement With Blue Major
By Edward Landon
Located in New Orleans, LA
The image is a stylized depiction of musical notes. This silkscreen, created in 1941 by Edward Landon, is pencil signed and is from an edition of 40. Landon was one of the early pi...
Category 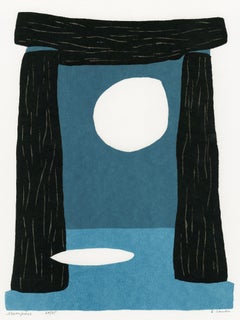 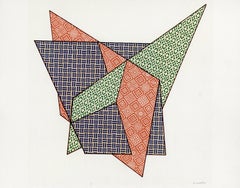 The Jolly Corner. A portfolio of 21 etchings.
By Peter Milton
Located in Fairlawn, OH
Category

Peter Milton
The Jolly Corner. A portfolio of 21 etchings., 1971

Let It Be Orange
By Julian Stanczak
Located in Fairlawn, OH
Category

Julian Stanczak
Let It Be Orange, 1981

Meditation and Minou
By Will Barnet
Located in Fairlawn, OH
Category

Will Barnet
Meditation and Minou, 1980