Edgar Chahine was born in Vienna, Austria to Armenian parents. At age 21, he decided to travel to Paris and pursue a career in fine arts. He studied painting under formal instruction at the Académie Julian, but his natural ability and his determination to express himself as an artist led him to a personal style based more on the reality of the streets of Paris than the confines of the classroom. Chahine began to experiment with the possibilities of printmaking at the age of 25. Although he had already achieved some success with his paintings, he became fascinated with prints and soon worked exclusively in this medium. His prints were very much in demand by collectors and the well known publisher Edmond Sagot quickly became his dealer. He won several medals and awards and received many commissions. Chahine's print œuvre is an equal representation of elegant Parisian men and women, Bourgeois society and more common scenes of country fairs and street life. His sympathetic depictions of children, beggars, circus performers and other often forgotten people were engaging and touched the emotions of the observer, while his portrayals of the more fashionable side of Paris accurately captured its "joie de vivre". The death of his fiancé plunged him into a deep depression, and he left Paris to travel through Italy. This voyage gave him the serenity and the inspiration to begin working with new enthusiasm, etching the day's drawings onto copper plates in his hotel room each night. He returned with new vigor and expanded his efforts to once again include pastels and oils in his work. This productivity was not to last, as the combination of terrible events in Armenia and Syria and the outbreak of World War I rendered Chahine unable to work. Not until his marriage in 1921 did he begin to make art again. In 1925, he became a French citizen and began a new burst of creative activity in fine prints and illustrated books. Many of Chahine's prints were lost in a fire in his atelier in 1926, and many more were destroyed in a flood in 1942.

"La Promanade" Black and White Print of a Women in a Carriage Edition
By Edgar Chahine
Located in Houston, TX
Black and white print of an upper class women in a carriage. There are other figures in the back riding in a carriage as well. Edition 17 of 58. Painting is signed by the artist and ...
Category

Edgar Chahine
"La Promanade" Black and White Print of a Women in a Carriage Edition , 1902

La Promenade
By Edgar Chahine
Located in Fairlawn, OH
Signed in pencil lower left Published by Edmund Sagot, Paris Edition of 50 in black only, aside from the edition of 50 in color. Printed on MBM – J Perrigot Arches wove paper Ref...
Category 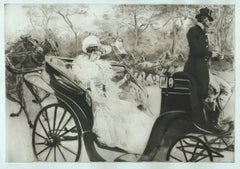 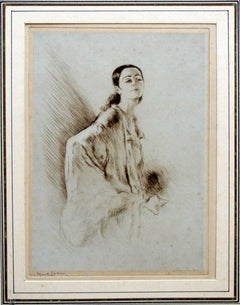 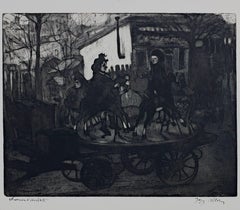 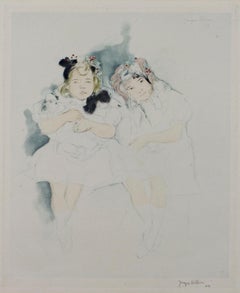