E. Ambrose Webster was among our first and most forceful modern painters, and is one of America’s greatest interpreters of Fauvism. His masterworks are in such public collections as the Corcoran and the Hirshhorn Museum and Sculpture Garden. In recent years his work has figured prominently in publications and exhibitions at Babcock Galleries’ E. Ambrose Webster: A Retrospective of Paintings and The Armory Show Years of E. Ambrose Webster, in the High Art Museum’s The Advent of Modernism, 1987 and in William Gerdts’ 1997 landmark work The Color of Modernism: The American Fauves and, more recently in 2007–08, the Greenville County Museum of Art’s retrospective exhibition E. Ambrose Webster: Pioneer Modernist. Webster’s dynamic career spanned 40 years and found him consistently in the middle of the Modernist movement. He traveled and exhibited widely, knew important artists everywhere, was acclaimed by his peers and created some of the finest and most adventurous paintings of his time.

Webster was a consummate American Modernist painter. After initial studies under Edmund Tarbell and Frank Benson in Boston, he spent nearly three years in Europe absorbing the latest developments in the Post-Impressionist art world. By 1900 he returned to the United States, and, having developed his own original idiom, became a prominent member of the progressive art community. Over the years he traveled widely in France, Spain, Italy, North Africa, the Azore Islands, Jamaica and Bermuda, seeking the sunlight-heightened color which inspired him. In 1906, while painting in the Caribbean, he exhibited a work which secured the Musgrave Silver Medal from the Institute of Jamaica. By 1913 he was exhibiting in Boston and Cleveland with Charles Hovey Pepper, Carl G. Cutler and Maurice Prendergast. Webster also participated in the 1913 International Exhibition of Modern Art (The Armory Show) and showed in New York thereafter.

(Biography provided by Driscoll Babcock Galleries)
Applied Filters4 results
Artist:E. Ambrose Webster
to
Item Location
4
Height
to
Width
to
4
4
2
1
1
4
10,042
2,538
2,418
1,869
3
3
3
3
1
American Modern Painting by E. Ambrose Webster, Azores, 1913
By E. Ambrose Webster
Located in New York, NY
This painting of the coasts of the Azores islands by Portugal is a superb example of Webster’s mature modern work where the influence of European Fauvism comes to the fore with its l...
Category 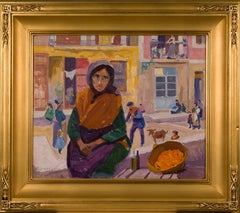 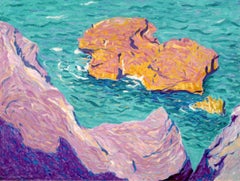