Dan Rupe, a supremely talented artist as bright and dazzling as his paintings. At one time in his life, living in Chicago, Rupe painted from photographs. One day Rupe ventured into his garden, set up his easel and went to work, he never painted from a photograph again. Why, when he could paint life? Rupe went from the studio to the garden, to the street. The experience Rupe got painting and the people, all sorts of people from all walks of life, their interaction, caused him to value living, being an artist he was safe to talk to, to approach. Rupe was part of the world, part of street theatre. Rupe was born in Elkhart, Indiana. His father, although born in a log cabin in western Kentucky, rose from poverty to become a surgeon. He worked at the hospital. He worked all the time. Rupe was raised as a Mennonite. They were at the World Conference, they had chrome on their bumpers and zippers. They were a close family, lived out in the country and had a large garden. His mom canned everything, not because of money, but because this is how you do it. It’s a midwestern thing. Rupe had chores to do and gained a work ethic. Rupe still gets up early to do his work, he trusts it, his mind is clearest, his emotional slate is cleanest in the early morning. The daughter of a neighboring farmer was in her 30’s, a beatnik and an artist. She gave Rupe art lessons; working in pastels and soap carving, he was six. Rupe had three heroes growing up, “Amelia Erhardt, because she was so strong she got lost. Georgia O’Keefe, nothing could stop her and Marilyn Monroe, her beauty could not stop her.” Rupe’s mother had a beautiful singing voice and urged him to take music lessons. At 11, Rupe got serious about oil paints. Turning 16, Rupe decided to be a painter instead of a musician. Rupe’s father took him for a drive and told him how difficult it was going to be making a living from my art. Rupe thought it wouldn’t be any more difficult than music. The following year Rupe went off to Interlochen Arts Academy in Michigan with his parent’s blessing. Always one to seek out truth, at 17, Rupe went to his family and his church and told them he was homosexual, They did not reject him, which amazed him. Fond affection passes over Rupe’s eyes, pride in his family for their courage and willingness to embrace truth. At this time Rupe also made a clear shift in his painting, He eliminated black and earth tones from him palette. Rupe saw murky, muddy paintings and students struggling to get clear images and not understanding why. Today Rupe embraces this same technique. Under painting in red, his vivid colors vibrate with unique power, Painting provides immediate response. Rupe works in oils because the paint doesn’t shift in tonality, there is truth in the color. When Rupe teaches he tells his art students, “The Jibber-Jabber in your mind is a lie, go with your first thought it’s the truth, the most important of all. Choosing your subject whatever it may be is about honestly experiencing what is in front of you. It is what you need to create.” “Art is not a noun. Art is a verb, you must take action.” Rupe lived and painted all over the world, from Katmandu to Easter Island, the Dominican, Mexico, Wisconsin, Chicago, Provincetown to L.A. Rupe lived the fast lane pace of booze and drugs for a time. Rupe thought he’d either live to 110 or die young. At some point in your life, life slips and you ask, do you want to live or die? Rupe chose to live. Rupe put on the brakes and turned it around. Rupe could have become a well-known artist in the L.A. art scene, but the demeaning jobs he’d have to take to get there angered him and that was troubling. Then a moment of synchronicity occurred. Rupe helped two friends move to Hudson from L.A. The instant Rupe drove into town he burst into tears, the architecture, the beauty, the grit, the past splendor and years of neglect. It was real, so Rupe moved here. Where she lives, she has become there. Rupe asks why he loves painting on the street. Rupe is attracted to the color and patterns and the light. Rupe chose to make art brightly with bold strokes, it’s laughing out loud with nothing to hide, he just let it out. Rupe wants people to stop and look at his work, He loves to talk to them, it’s life, it’s genuine. Rupe knows who he is when he paints. 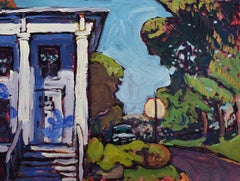 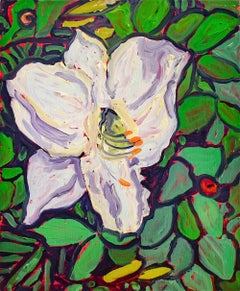 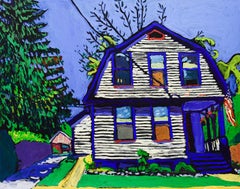 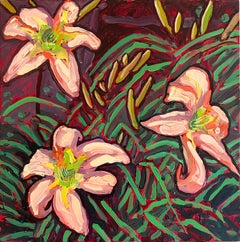 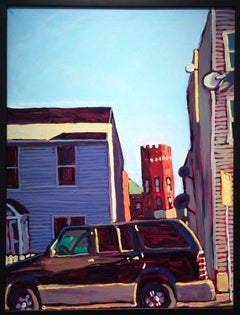 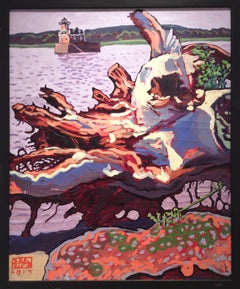 H 12 in. W 12 in. D .25 in.
Ducks in the Shade (Small Abstract Landscape of Red Barn in Green Field)
By Dan Rupe
Located in Hudson, NY
Modern abstracted landscape painting on panel created by Hudson Valley based artist, Dan Rupe. Oil on panel, 11 x 14 inches unframed This vibrant yet tranquil landscape of a red ba...
Category