Daniel Celentano was born in New York, the fifth of 15 children of Neapolitan immigrants. He lived most of his life in the uptown Manhattan area known as Italian Harlem, and much of his work chronicles the events and people of that neighborhood. At the age of 12, Celentano became the first pupil of renowned American Scene painter Thomas Hart Benton and later assisted Benton in the execution of several murals. The two artists remained friends throughout their lives. By 16, Celentano had won several scholarships, one of which enabled him to study for three years at the Cape Cod School of Art under Charles W. Hawthorne. Other grants came from the New York School of Fine and Applied Arts, and the National Academy of Design. Celentano began showing his work in New York City in 1930 when he participated in an exhibition at Alfred Stieglitz's Opportunity Gallery. His success there was followed by exhibitions at other New York galleries and participation in major museum annuals, including the Corcoran Gallery of Art, the Pennsylvania Academy of the Fine Arts, the Whitney Museum of American Art, and the Carnegie Institute. Celentano showed six paintings at the Art Exhibition by the Staff Artists of the American Museum of Natural History. In 1936, the Carnegie Institute and the Chicago Art Institute bought works by Celentano exhibited at Walker Galleries. The Whitney Museum of American Art followed suit the next year, purchasing Celentano's entry First Born in the museum's biennial exhibition. The Walker Galleries gave Celentano his first one-man exhibition in 1938. Celentano joined the mural division of the WPA, where he created murals for the Queens Borough Public Library, Flushing Branch (Commerce, 1936), and P.S. 150 in Queens (Children in Constructive Recreation and Cultural Activity, 1940). In 1938, he won a commission through the Treasury Department to execute the mural, The Country Store and Post Office, for the U.S. Post Office in Vidalia, Georgia. With the outbreak of World War II, Celentano joined the art department of the Grumman Aircraft Corporation, Long Island, where he executed a mural entitled The Flight of Man, which depicts the advancement of transportation and communications from ancient times to present. The mural is now at the Cradle of Aviation Museum on Long Island. Daniel Celentano's work can be found in many museum collections, including the Whitney Museum of American Art, Smithsonian American Art Museum, and High Museum of Art. 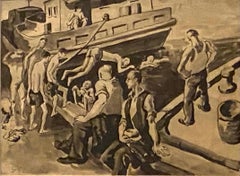 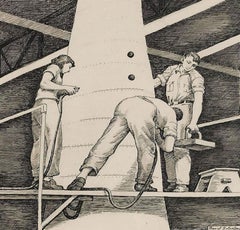