Dan Allison first made his mark on the art world in the late 1970s with his instantly recognizable aquatint etchings, created through a revolutionary one-plate, three-color printmaking process that the artist pioneered and refined while attending Sam Houston University in Huntsville, Texas. The artist earned a bachelor of fine arts degree with an emphasis on printmaking from the University in 1978.

In 2000, Allison turned his attention toward first establishing a printmaking studio, Texas Collaborative Arts, with an emphasis on the collaborative aspects between printer and artist. In 2007, he established the Nau-haus art venue, where he presented more than 60 exhibitions between 2007 and 2011 before moving to his present location in Houston's Upper Kirby Gallery district on Gallery Row. There, the D.M. Allison gallery continues as a venue dedicated to the exploration of new and emerging talent as well as established work by regional and nationally recognized independent visual artists with ideals, direction and conviction. 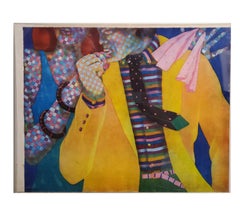 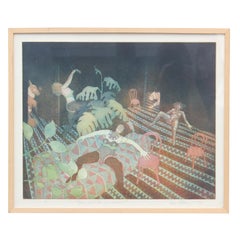 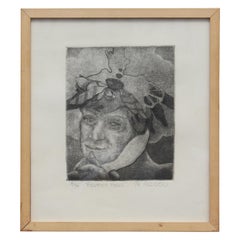 Red and Yellow Triangular Abstract Painting
By Dan Allison
Located in Houston, TX
Abstract geometric painting of triangular forms on a red and yellow field by artist Dan Allison in 2004. Artist Biography: Allison first made his mark on the art world in the late ...
Category

Nude Portraits of a Couple Inspired by the Style of Picasso
By Peter Max
Located in Houston, TX
Category

Peter Max
Nude Portraits of a Couple Inspired by the Style of Picasso , 1999