Charley Harper was a Cincinnati based American modernist artist. He was best known for his highly stylized wildlife prints, posters and book illustrations. Born in Frenchton, West Virginia in 1922, Harper had an upbringing at his family farm, which influenced his work till his last days. He left his farm home to study art at the Art Academy of Cincinnati and won the academy's first Stephen H. Wilder Traveling Scholarship. While at the Academy and supposedly on the first day, Harper met fellow artist Edie Mckee, whom he married shortly after graduation in 1947. He and Edie spent their honeymoon traveling the country, mainly in the west and south, being able to do so because of the Stephen H. Wilder Scholarship the Academy awarded to Harper for post-graduate travels. Harper returned to the Art Academy of Cincinnati as a teacher and also worked for a commercial firm before working on his own. He and his wife worked out of their Roselawn and Finneytown homes and later, with their only child Brett Harper, formed Harper Studios. During his career, Harper illustrated numerous books, notably The Golden Book of Biology, magazines such as Ford Times as well as many prints, posters and other works. As his subjects were mainly natural, with birds prominently featured, Harper often created works for many nature-based organizations like the National Park Service, Cincinnati Zoo;,Cincinnati Nature Center, Hamilton County (Ohio) Park District and Hawk Mountain Sanctuary in Pennsylvania. He also designed interpretive displays for Everglades National Park. Harper died on June 10, 2007, after contending with pneumonia for some months.

(Biography provided by The Benjaman Gallery)
Applied Filters3 results
Creator:Charley Harper
3
to
Item Location
3
3
3
1
2
1
2
3
3
3
3
3
3
5,347
1,792
1,503
1,367
Modernist Print of Bird with Fall Leaves by Charley Harper
By Charley Harper
Located in Sagaponack, NY
A wonderful example of the "minimalist realism" by the celebrated Cincinnati modernist, depicting a bird and fall leaves.
Category 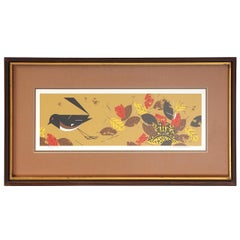 Modernist Print of Bird with Fall Leaves by Charley Harper 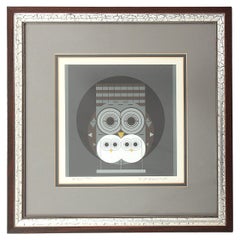 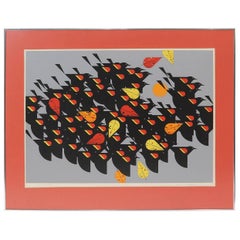