Charles-Guillaume Diehl founded his cabinet making and decoration firm at 19 Rue Michel-Le-Comte in 1885. His workshops produced elegant little pieces of furniture in rosewood and thuja and novelties with bronze and porcelain embellishments. It was his luxury boxes, however, (liqueur cellarettes, cigar cabinets, games boxes, cashmere cases, jewelry cases) which assured Diehl’s renown. Already rewarded with a bronze medal at the Universal Exhibition of 1855 in Paris, he exhibited a jardinière with china columns and a liqueur cabinet at the Industrial Arts Exhibition in 1861. In collaboration with the designer Jean Brandely (active from 1867 until 1873), Diehl renovated his decorative repertory and created astonishing pieces of furniture in the Grecian style, which had a dazzling success at the Universal Exhibition in Paris in 1867, where his cabinets also won a silver medal. Certain motifs were so typical of Diehl’s work that they received extensive commentary by the art critic J. Mesnard in his book “Les Merveilles de l’Exposition Universal de 1867”. He writes of a table of which “the pendant bearing hooks and the fan-shaped radiating motif which ornaments the entablature are engraved with love” and a jewelry case where “The head in fine Grecian style makes up the essential part of the fine gilt bronze ornamentation”. For this Universal Exhibition, Diehl also formed a partnership with two famous sculptors: Emile Guillemin (1841–1907), who carved the relief for a mahogany sideboard with galvanic gilt bronzes and Emmanuel Frémiet (1824–1910), who executed the low relief for a cedar medal cabinet with marquetry and silver-plated bronzes. Diehl was again rewarded with a medal of honor at the Union Central Exhibition of 1869 and a progress medal at the Universal Exhibition in Vienna in 1873. Showered with praise by the critics, Diehl is considered one of the most innovative artists of the 19th century. His final appearance was at the 1878 Universal Exhibition in Paris, where he presented outside the competition, his most recent creations, including a work table in marquetry, which with its naturalistic grasshopper motif anticipated Art Nouveau.

French Center Table in the Manner of Andre-Charles Boulle 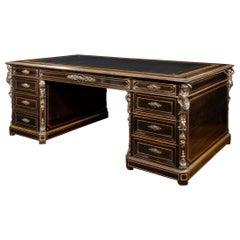 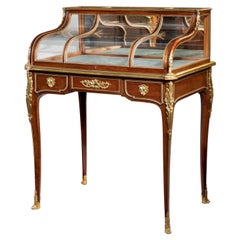 H 28.5 in. W 17 in. D 17 in.
A Napoleon III period silvered metal mounted oak humidor cabinet by Diehl
By Charles-Guillaume Diehl
Located in London, GB
Charles-Guillaume Diehl, German/French, 1811-1885 The upper section with a door mounted with Apollo driving his chariot amongst clouds with a ribbon-tied laurel wreath at each angle...
Category