Charles Taylor Bowling was a lithographer, as well as a painter of still-life, landscape and urban scenes, who was born in Quitman, Texas, and died in Dallas. Though a long-lived artist — into his early 90s — he gave up painting in 1965 due to failing eyesight. Bowling combined art with a job, having a long career as a draftsman and head of the drafting department at Texas Power and Light from 1916–68. In addition, Bowling got a late start as a fine artist, only beginning to paint in his mid-30s while recovering from an illness. He studied with Alexandre Hogue, Frank Klepper, and Olin Travis at the Dallas Art Institute, where he later was a teacher. He taught at the Dallas Art Institute and was a founding member of the Lone Star Printmakers. Bowling also belonged to the Dallas Art Association; the Dallas Print and Drawing Society; the Frank Reaugh Art Club; the Klepper Sketch Club; the Southern States Art League; and the Texas Fine Arts Association. He was also closely associated with The Dallas Nine, a group of painters, printmakers, and sculptors active in the 1930s and early 1940s, who painted the land and people of the Southwest. In 2003, the Dallas Museum of Art put on an exhibition, Progressive Texas: Art at the Texas Centennial of 1936, which included Charles Bowling's work, along with that of other artists active in Dallas in the 1930s and 1940s, such as Jerry Bywaters, Otis Dozier, Alexandre Hogue, and Harry Carnohan. There is conflicting information about literature about the actual time when he stopped painting. It is known that the artist suffered from cataracts which cause a slow clouding effect on one's vision, and he is known to still have painted in 1962. In the book Texas Vision: The Barrett Collection (Southern Methodist University Press, 2004) a reference under his biography states that he gave up painting in 1965. Since he is known to have worked for the power company until 1968, we assume that his progressively failing eyesight caused him to stop painting sometime around/after 1965. There have been examples of his works dated after 1965. 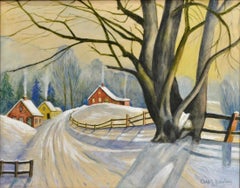 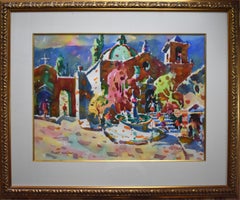