Cees Brokke, his wife, Marie and their two grown children, Nancy and Clifford, who are also artists, live in a 159-year-old former farmhouse. Every day, Mr. Brokke, a native of the Netherlands who is a retired freelance designer for such companies as K.L.M., El Al and Bristol-Myers, climbs the uneven wooden stairs to the small building on the property that once served as a general store. There, he paints fantasy-laden pictures, mingling space exploration, religion and mythology and carves intricate wooden sculptures. Brokke proudly shows visitors through his historic home, which now occupies slightly more than one of its original 32 acres, using century-old sales slips -- safeguarded in scrapbooks by Clifford -- to help tell the house's tale. He says the three artists work independently. "We never interfere with each other," Brokke said. The Time Has Come Like Mr. Brokke, whose teeming imagination also leads him to write mystical short stories and novels based on his Dutch heritage, Mr. Landzberg is retired. Unlike Mr. Brokke, however, the Yorktown Heights resident did not work full-time as an artist until April, when he chose to take early retirement from his job as a senior engineer with International Business Machines. He was waiting for the day when his three children were financially independent, Mr. Landzberg said, to devote himself to the artwork that has absorbed him since his own childhood. Now that the time has come, "it's a wonderful feeling," he said. Mr. Landzberg's one-man sculpture exhibition, spanning his work from the last two decades, will be on view at the Howland Center in Beacon. Some of the large steel sculptures and silk-screen prints can be seen after that at the Gallery in Pound Ridge and at the Millbrook Gallery in Millbrook and the Rovereto Gallery in Rhinebeck. The artist wields his six-foot sculptures from found materials, creating curved forms with both outdoor and indoor finishes. In an earlier period, Brokke said, he used blacksmithing tools to forge figures but abandoned these techniques for the greater flexibility of welding. Now, Mr. Landzberg said, he is exploring "a range of concepts that relate to perception," working with painted metal to integrate the views seen from looking into and out of windows.

(Biography provided by Bridges Over Time)
Applied Filters1 result
Creator:Cees Brokke
1
to
Item Location
1
1
1
1
1
1
1
1
1
5,246
1,707
1,505
1,284
Cees Brokke "The Spirit of the House"
By Cees Brokke
Located in Palm Springs, CA
A wonderful surrealist Mid-Century painting by the noted Dutch/American artist Artist Cees Brokke. It it's original frame, we did have to have the linen liner replaced. From an old ...
Category

Cees Brokke "The Spirit of the House" 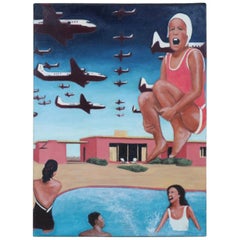 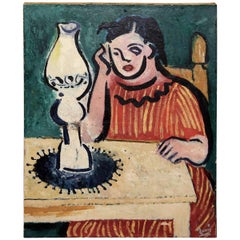 Older Interesting Painting Signed Illegibly in the Style of Matisse

Early 1990s Painting on Paper by the Group Artfux

Vibrant Abstract by George Obando, "Unity and the Americas", 1997