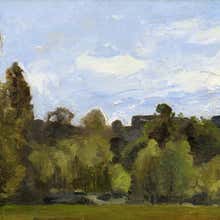 Camille Pissarro was one of the most influential members of the French Impressionist movement and the only artist to participate in all eight Impressionist exhibitions.

Born in July of 1830 on the island of Saint Thomas in the Danish West Indies, Camille was the son of Frédéric and Rachel Pissarro. At the age of 12, he went to school in Paris, where he displayed a penchant for drawing. He returned again to Paris in 1855, having convinced his parents to allow him to pursue a career as an artist rather than work in the family import/export business. Camille studied at the Académie Suisse alongside Claude Monet, and, during this time, he met Paul Cézanne, Édouard Manet and Pierre-Auguste Renoir.

In 1869, Camille settled in Louveciennes. The outbreak of the Franco-Prussian War in 1870 prompted him to move to England, and, with Monet, Camille painted a series of landscapes around Norwood and Crystal Palace, whilst studying English landscape painting in the museums. Upon returning a year later at the end of the War to Louveciennes, Camille discovered that only 40 of his 1,500 paintings — almost 20 years’ work — remained undamaged.

Camille settled in Pontoise in the summer of 1871, remaining there and gathering a close circle of friends around him for the next 10 years. He reestablished relationships with Cézanne, Manet, Monet, Renoir and Edgar Degas, expressing his desire to create an alternative to the Salon, so that their group could display their own unique styles. Camille married Julie Vellay, with whom he would have seven children. Cézanne repeatedly came to stay with them, and, under Camille’s influence, he learned to study nature more patiently, even copying one of Camille’s landscapes in order to learn his teacher’s technique.

The first Impressionist group exhibition, initiated by Monet in 1874, earned the Impressionists much criticism for their art. While mainly interested in landscape, Camille introduced people — generally, peasants going about their rural occupations — and animals into his works, and they often became the focal point of the composition. It was this unsentimental and realistic approach, with the complete absence of any pretense, which seemed to stop his work from finding appreciation in the general public.

One of the few collectors who did show interest in Camille’s work was a bank employee named Paul Gauguin, who, after acquiring a small collection of Impressionist works, turned to Camille for advice on becoming a painter himself. For several years, Gauguin closely followed his mentor, and, although their friendship was fraught with disagreement and misunderstandings, Gauguin still wrote shortly before Camille’s death in 1906: “He was one of my masters, and I do not deny him.”

In the 1880s, Camille moved from Pontoise to nearby Osny, before Eragny, a small village much further from Paris. At a time when he was dissatisfied with his work, in 1885, Camille met both Paul Signac and Georges Seurat. He was fascinated by their efforts to replace the intuitive perceptive approach of the Impressionists with a “Divisionist” method, or scientific study of nature’s phenomena based on optical laws. Despite having reached his mid-50s, Camille did not hesitate to follow the two young innovators. The following year, he passed on this new concept to Vincent Van Gogh, who had just arrived in Paris and was keen to learn of the most recent developments in art. However, after a few years, Camille felt restricted by Seurat’s theories and returned to his more spontaneous technique whilst retaining the lightness and purity of colour acquired during his Divisionist phase.

In the last years of his life, Camille divided his time between Paris, Rouen, Le Havre and Eragny, painting several series of different aspects of these cities, with varying light and weather effects. Many of these paintings are considered amongst his best and make for an apt finale to his long and prodigious career.

When Camille Pissarro died in the autumn of 1903, he had finally started to gain public recognition. Today his work can be found in many of the most important museums and collections throughout the world.

Paysanne Nouant son Foulard (Peasant Arranging her Scarf)
By Camille Pissarro
Located in New Orleans, LA
This intimate work by Camille Pissarro represents a period of significance for the Impressionist master. The early 1880s was a time of great experimentation for the artist, after he ...
Category

Camille Pissarro
Femme a la Barriere (Woman at the Gate), 1889

Baigneuses, Le Jour
By Camille Pissarro
Located in San Francisco, CA
Hand signed in pencil on the mount just below the image lower right C. Pissarro. A beautifully tonally printed lifetime impression of the only state of this extremely rare lithog...
Category