Brigitte Coudrain studied printmaking techniques at the atelier and workshop of Johnny Friedlaender, in Paris. In 1955, Coudrain exhibited a series of watercolors. By 1958, however, she began concentrating upon the art of etching and during this year participated in a number of major printmaking expositions, including the Triennale Internationale de la Gravure, Switzerland, and the Salon de Mai, France. She received an award for her graphic art in 1959 at the Biennial de Paris. Since that time the art of Brigitte Coudrain has been the subject of numerous exhibitions in major galleries in Paris, Hamburg, Copenhagen, Berlin, Jerusalem, Krakow, Tokyo, Chicago and New York. During the late 1960s and early 1970s, Brigitte Coudrain spent a considerable amount of time in New York City. 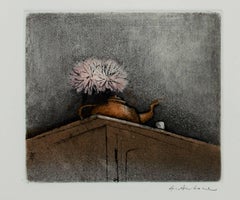 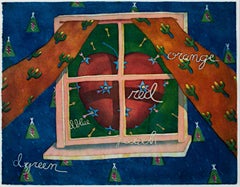