Boris Lovet-Lorski, sculptor, lithographer and painter, who contributed significantly to the American Art Deco movement, was born in Lithuania in 1894. Trained as an architect at the Royal Academy in Petrograd, throughout his career, Lovet-Lorski was acutely sensitive to volume and structural space. He also incorporated architectural backgrounds in the flattened aesthetic of his Art Deco neoclassicism, hallmarks of his elegant in a distinctly original style. Lovet-Lorski's idealized subject matter and masterful designs quickly won the young sculptor critical acclaim and led to his first one-man show in Boston in 1925, the year he became an American citizen. He was then invited to teach at the Milwaukee Institute of Art & Design, quickly developing a reputation that catapulted him into the New York artistic milieu. He exhibited on a regular basis with the Wildenstein Gallery from 1928 onward. Lovet-Lorski was a quintessentially Art Deco artist. His unique style was an amalgam of Modern, Tribal, Oriental, Archaic and Teutonic influences. His Slavic roots and eclecticism tempered his modernism with lyricism and a sense of mystery. His sculptures, in bronze or Black Belgian Marble, are sleek and gorgeously polished. The work from the 1920s and 1930s often featured exotic, allegorical nudes, stylized horses or busts. Lovet-Lorski was particularly noted for his female nudes with narrow hips, thoracic cages that broaden as they rise from waist to shoulder and wide-spread arms, with hands clasped and held behind or above classically modeled heads that were perched on their torsos like flowers on a stem. Lovet-Lorski's idealized vision coincided perfectly with the mechanization of the era, its gleaming, streamlined airplanes, automobiles and proud skyscrapers, that were the sacramentals of the inter-war period. He regularly worked in sumptuous and precious materials, onyx, jade and rare, fossilized wood essences, such as that taken from a 600-year old, Assyrian lemon tree. He tailored the subjects of his sculptures to suit the nature of his materials. The Belgian black marble of Head of a Woman is a dense and close-grained stone that complements the idealized features of the figure. God Unknown, one of the sculptor's best-known works was carved in pure white Carrara marble. His preferred exteriors were like polished silk,” adding to the serenity and timelessness that his sculptures convey. Lovet-Lorski’s style and the allure of his materials brought him commissions for portraits of high society and celebrated figures. By 1929, he was successful enough to maintain studios in New York, Rome and Paris. Wildenstein Gallery gave him a retrospective exhibit in 1940. His recognition was international and his sculptures were acquired by the permanent collections of over 20 major museums. The sculptor received the French Legion of Honor in 1950. He was a member of the National Academy of Design, the National Sculpture Society, the Society of Independent Artists and the Salons of Paris. His last major work was the Manila War Memorial. He attempted to complete the monument in 1957, but arthritis had crippled him to the point that he could no longer sculpt. He finished his career as a painter and his works continued to enjoy considerable success. Lovet-Lorski's works are held in the collections of the Musée de Luxembourg, Paris; the Bibliothèque Nationale, Paris; the Petit Palais, Paris; the British Museum, London; and many museums and galleries in the United States: the Metropolitan Museum of Art, New York; the Los Angeles Museum of Art; the Seattle Art Museum and the San Francisco Museum of Fine Arts. As an interesting footnote: in his youth, he had considerable success with the feminine sex that was so eloquently extolled in his art.

"Striding Nude," Bold Art Deco Drawing with Watercolor by Lovet-Lorski
By Boris Lovet-Lorski
Located in Philadelphia, PA
Quintessentially Art Deco, with long, lean lines and a highly stylized nude, this drawing was executed by Boris Lovet-Lorski in Paris, before he settled in America at the age of 26. ...
Category

"Mythological Scenes," Important Pair of Art Deco Bronzes by Lovet Lorski
By Boris Lovet-Lorski
Located in Philadelphia, PA
This unique pair of silvered bronze panels, depicting idealized nude figures and mythological creatures, are some of the finest high style Art Deco pieces we have ever offered. One p...
Category 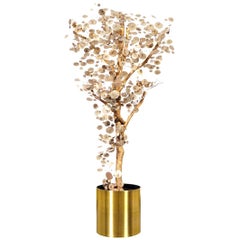 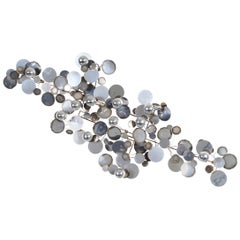 Previously Available Items
Tall Brass Entwined Cranes Sculpture by Boris Lovet Lorski
By Boris Lovet-Lorski
Located in Haddonfield, NJ
Elegant cranes with their sleek shape and blackened bodies. Intertwined at their necks and their legs curve into a graceful round pedestal. Cranes have been used throughout design fo...
Category