Benjamin Kopman was born in Vitebsk, Russia, in 1887 and emigrated to the United States in 1903. Two years later, he enrolled at the National Academy of Design and earned his first major exhibition in 1914 at the Pennsylvania Academy of the Fine Arts. He achieved both commercial and critical success throughout the next decades, working both as a Works Progress Administration and commercial artist and as an exhibitor in solo and group shows. His paintings and prints are easily recognizable. Many of his subjects are of fellow immigrants, striking in their plainness and their ordinary activities. He paints in an almost primitive, cartoonish manner, using heavy black outlines that suggest the influence of Rousseau and Roualt. Kopman's work is held in the collections of many institutions including the Whitney Museum of American Art, Museum of Modern Art, Brooklyn Museum, Metropolitan Museum of Art, and Pennsylvania Academy of the Fine Arts. 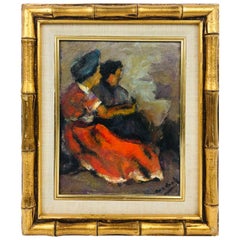 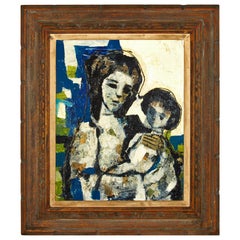 Portrait of a Women in Yellow Dress Oil on Canvas by Irwin D. Hoffman

"Gathering on Beach" Modern 1949 Oil on Canvas by George Dergalis

"Woman with Fish" by Roger San Miguel Oil on Canvas, 1980

Pierre Paulus Portrait of Man in Hat Oil on Canvas

"Portrait of a Man" Signed Abstract Oil on Canvas by Peter Dean
By Peter Dean
Located in Plymouth, MA
Category