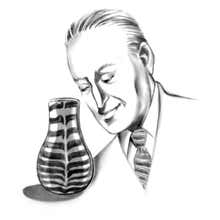 Partnerships come and go within the community of glass-making artisans on the Venetian island of Murano, where business relationships seem as complex as the shifting alliances in the notoriously acrimonious Italian parliament. Formed in 1942 by members of families with centuries of experience in the craft, Barovier, Toso & Co. has proven to be one of the most enduring and prosperous Italian glass manufactories of recent decades. Under the nearly 50-year artistic directorship of cofounder Ercole Barovier (1889–1974), the company created buoyant traditional pieces such as chandeliers and sconces, and it pioneered an array of innovative modernist designs with bold colors, patterns and surfaces.

To appeal to gentler, more conservative tastes, Barovier Toso produced a range of lilting, sinuous lighting pieces that are often described as embodying “Liberty Style” — the Italian term for Art Nouveau, taken from the name of the famed London department store that promoted 19th-century organic textile designs in the manner of William Morris. The hallmarks of the style in Barovier & Toso works are elements of glass in the shape of thick leaves, fronds and flower petals, deployed along with other naturalistic ornament in sconces, pendants and chandeliers.

Ercole Barovier began his personal aesthetic transition toward modernism in the 1930s with his Primavera series of vases and animal sculptures — idiosyncratic milky-white and clear glass filled with tiny bubbles and hairline interior fissures that he produced for Artisti Barovier, a firm headed by his father and uncle. Later, with Barovier Toso, he would explore such novel styles as the mosaic-like Pezatto glass; fluid Spiral patterns; the pebbly textured Barbarico line and the complex, layered and highly colored abstractions of the Oriente series of vases and bowls.

Traditional or modern, Barovier Toso — still under family control — has produced one of the finest and most diverse catalogues of Murano glass in the last 100 years.

Barovier e Toso Murano Sapphire Blue and Gold Aventurine Bottle with Ball
By Barovier&Toso
Located in North Miami, FL
This gorgeous Italian Murano ribbed sapphire blue and gold aventurine glass bottle or perfume bottle is by Barovier e Toso and has the original sticker on the bottom. This is from th...
Category

Barovier & Toso Graffito Vase designed by Ercole Barovier
By Barovier&Toso
Located in Philadelphia, PA
Bold strokes of royal blue intermixed with eyelets of gold dust. The vase is engraved Barovier and Toso at the base, along with a paper label with the model number. It also has a cle...
Category

Vintage Murano Efeso Vase by Barovier & Toso, circa 1980
By Barovier&Toso
Located in Roma, IT
This Efeso vase is a wonderful blown-glass vase for the Venetian glass Company Barovier & Toso, designed by Ercole Barovier (1889-1974) in 1964. This is a piece from an edition ci...
Category

Barovier&Toso Glass for sale on 1stDibs.

Toso Glass and Barovier are available for sale on 1stDibs. These distinctive objects are often made of glass and are designed with extraordinary care. There are many options in our Barovier & Toso Glass collection, although gold editions of this piece are particularly popular. 79 vintage editions of these items are in stock, while there is also 0 modern edition to choose from. Many original glass by Barovier & Toso were created in Europe during the 20th century in the modern style of the mid-century. If you’re looking for additional options, many customers also consider Glass by Ercole Barovier, Archimede Seguso and Alfredo Barbini. Barovier's Glass prices can vary depending on size, time period and other attributes. 1stDibs's price starts at US$335 and tops out at US$17,000, while pieces like these can sell for US$1,651.