Antonio Guansé, a Spanish painter, was born on January 1, 1926, in Tortosa. When he won the prize for criticism in 1962, the newspaper Le Monde presented his work, “From nature, he paints with a range of ochres sensitive and warm and deaf tones, Guansé only keeps Rhythmic lines of force, the combination of the masses, it does so with a figurative coherence which gives to its representation an objective quality without perceptible relation with the reality which is the subject of it." Ten years later, in the same journal, the evolution of Guansé's painting is underlined, “His palette, violently contrasted, has been simplified and brightened, with more brilliant reds, oranges and blacks than the burnt hues of a long time ago. This conquest of color seems to open up new spatial concerns." Guansé died on November 22, 2008, in Paris.

Oil on Canvas by Antonio Guansé 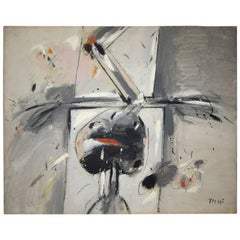 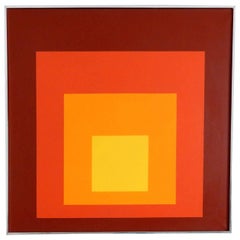 1975 Graphic Square Oil Painting in the Manner of Josef Albers