The son of a goldsmith, Parisian born Antoine-Louis Barye was a sculptor of animal subjects and acclaimed, not only for his apparent skill but as the founder of what became known as the French Animaliers School. Among his patrons were representatives of the state government and royalty including the Duke of Orleans and the Dukes of Luynes, Montpensier and Nemours. Well compensated financially, he was able to buy the best of materials and hire the country's most skilled foundry craftsmen. The foundry he hired was owned by Ferdinand Barbedienne and casts from this period were stamped with the letters, FB. However, he did not make a lot of money from his work because he was such a perfectionist that often he would not sell his work because he thought it was not 'quite right'. In 1848, he declared bankruptcy and his molds and plaster casts were sold along with the copyrights. Barye's specialty was aroused, angry seeming wild games such as lions and tigers and elephants, but he also did equestrian groups and mythology figures. In order to do realistic depictions of animal anatomy, he spent much time at the Jardin des Plantes in Paris. His early training was as an apprentice to a metal engraver, but being drafted in the army in 1812 ended that education. In 1832, he had established his studio, and unique at that time was his method of cold stamping his bronze casts so that each one had a special number. He had his first entry, The Milo of Croton, in the Paris Salon in 1819, winning a second prize. In 1831, a work regarded as a masterpiece, Tiger Devouring a Gavial, was in the Salon and purchased for the Luxembourg Gardens, which is now in the Louvre. However, many of his subsequent Salon submissions were rejected and so angered him that between 1836 and 1851, he refused to submit entries. In 1851, he again exhibited at the Salon with Jaguar Devouring A Hare, and this work, like the 1831 entry, was placed in the Luxembourg Gardens and eventually in the Louvre. In spite of problems with the Salon, Barye received many accolades for his work, and the period of 1837–48 was considered the most productive time of his career. However, in 1848, when he lost control of his work and it was reproduced by others including Martin and Barbedienne, the sculptures, according to some art professionals, are not as skillfully executed. In 1848, after his bankruptcy, Barye became director of Casts and Models in the Louvre, until 1850, when he was replaced by Emmanuel Fremiet. It was a very difficult time for him. However, within a few years, he began receiving accolades for the quality and uniqueness of his work, and people began appreciating the powerful images of his sculpture, especially the wildlife in their natural surroundings. In 1854, he was appointed Master of Zoological Drawing in the Musee d'Histoire Naturelle and held this position until his death in 1875.

"Ocelot carrying off a Heron", Bronze by Antoine Louis Barye '1795-1875'
By Antoine-Louis Barye, F. Barbedienne Foundry
Located in Marseille, FR
Bronze sculpture with brown patina nuanced with green representing an ocelot carrying a heron on a naturalistic terrace. The tiger cat holds imprisoned in its claws the heron which s...
Category 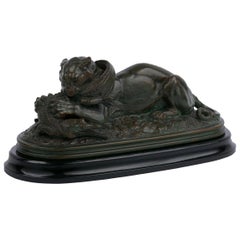 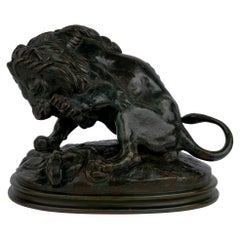 Poppy and Parakeet Candelabra by Antoine-Louis Barye, circa 1850

French Bronze Sculpture of a Basset Hound after A. Barye & F. Barbedienne

"Lion au Serpent N°1", Antoine Louis Barye '1796-1875' French School
By Antoine-Louis Barye
Located in Marseille, FR
Bronze sculpture with golden brown patina, representing a lion fighting a snake, signed Barye on the base, at the back of the animal, near the right hind back. The terrace is decorat...
Category 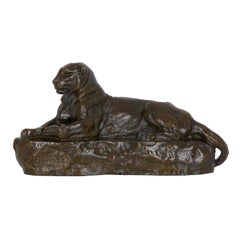 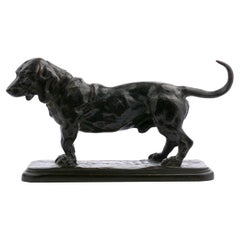 French Bronze Sculpture of a Basset Hound after A. Barye & F. Barbedienne