Andrea Salvetti was an Italian artist and sculptor, born in 1967, in Bozzano, Lucca, Italy. He was trained at the Firenze Architecture University. He started his artistic activity in 1993. In 1996, he presented his first sculpture-seat in aluminum. He took part in the 48th edition of the “Venice Biennale” in 1999, in the Italian pavilion, where he presented a project between art and food. His strong interest in food and cooking became a fundamental aspect of his designer and sculptor work.

For years, Andrea exhibited several projects between design and sculpture in DILMOS, NILUFAR and MOSS galleries and collaborated with other new galleries of the period, such as Two be and secondome et gallerianumero38. He developed a deep interest in molten materials and created experimental techniques in his own studio. He participated in international exhibitions, such as “Art Design London”, “Design Miami Basel” and many collective Italian and foreign projects. During those years, he also collaborated with design firms, such as Minotti, Gervasoni, Alivar, Zerodisegno and designed exclusive furniture for Sony, Heineken, Costagroup and special works for Philippe Starck. Since 1996, his works have been published in many catalogs and national and international magazines. 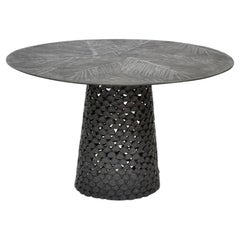 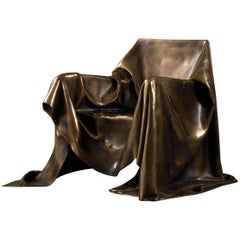 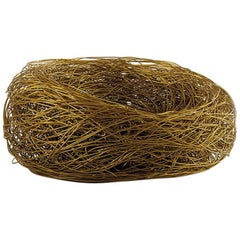 Rare and Monumental Italian Glass Vessel by Salviati & C. for Studio Dillon
By Andrea Salvetti
Located in Hollywood, FL
This stunning vessel is by Salviati, Its scale makes it most unusual, and the asymmetrical ovoid shape adds to its unique beauty. The exterior is a matte sapphire blue with ultra thi...
Category 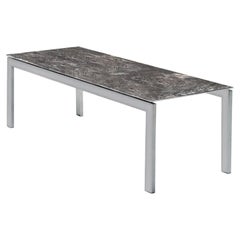 H 24.41 in. Dm 39.38 in.
'Tronchi' Side Table or Stool
By Andrea Salvetti
Located in London, GB
By Andrea Salvetti, contemporary Polished aluminium side table/stool cast as a cross section of a tree trunk Stamped signature: andrea salvetti.
Category

'Tronchi' Side Table or Stool

Furniture by Andrea Salvetti are available for sale on 1stDibs. These distinctive objects are frequently made of metal and designed with extraordinary care. In our collection of Andrea Salvetti furniture there are many options to choose from, although gray editions of this piece are particularly popular. In stock, we have 1 vintage editions of these items, while there are 11 modern editions to choose from as well. Many original furniture by Andrea Salvetti were created in Europe during the 20th century in modern style. If you are looking for additional options, many customers also consider furniture from Oak Design Edizioni Furniture, Driadelab Furniture and Enrico Marone Cinzano Furniture. Prices for Andrea Salvetti furniture can vary depending on size, time period and other attributes. The price for these items starts at $2,104 and tops out at $71,154, while pieces like these can sell for $21,930 on average.