Adriano Cecioni was born in Florence in 1836 into a middle-class family belonging to the local gentry. He began his artistic training in 1859 at the Florentine Academy under the sculptor Aristodemo Costoli. In 1860, Cecioni participated in a competition to provide military artworks for the Tuscan government. His submission, a maquette for a statue of Charles Albert of Savoy, won a prize but was deemed unsatisfactory by academicians and was not commissioned. In 1863, Cecioni received a grant and went to Naples, where he was instrumental in the formation of the artists' group Scuola di Resina. A major work of this period was his sculpture, The Suicide, which he exhibited at the Florence Academy in 1867. In 1872, Cecioni spent six months in London, where he contributed a series of caricatures to Vanity Fair magazine. After he returned to Italy, the sculptures he produced for the rest of his career were mainly genre works, often humorous. He died in Italy in 1886. His work is in some serious Italian collections, including Galleria d'Arte Moderna di Palazzo Pitti, Florence; Galleria Nazionale d'Arte moderna, Rome; Museo statale d'Arte Medievale e Moderna, Arezzo and Pinacoteca di Brera, Milan.

Patinated Bronze Group of a Child Holding a Rooster "L'enfant au Coq"
By Adriano Cecioni
Located in London, GB
The expressive model featuring a toy cannon at the child's feet, all set on a circular marble base The cannon signed 'Adriano Cecioni', with cartouche to the base inscribed 'ENFANT ...
Category 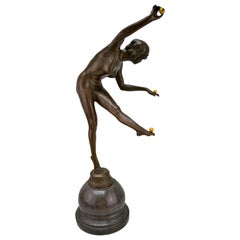 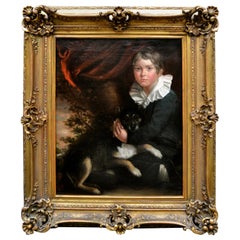 Painting of a Young Boy with His Dog after Henry Raeburn

Porcelain Pug Dog on a Gilt Bronze Rococo Base after a Model by Johann Kaendler
By J.J. Kaendler
Located in Vancouver, British Columbia
Category

Marble statue of Napoleon Crossing the Alps after a painting by Jacques L David
Located in Vancouver, British Columbia
Category

19 Century Marble Statue of the Rape of Prosperina after Bernini by Fabi Altini
Located in Vancouver, British Columbia
Category

19th Century Bronze Statue of a Nymph by A. Carrier
By Albert-Ernest Carrier-Belleuse
Located in Vancouver, British Columbia
Category

19th Century Bronze Statue of a Nymph by A. Carrier