John Adrian Darley Dingle was born in Barmouth, North Wales, on February 4, 1911. He came to Canada with his parents in 1914 and settled in Oakville, Ontario. Dingle left an insurance job to study art and in 1931, took instruction from J.W. Beatty at the summer school of the Ontario College of Art and Design. He later went to England, where he worked as an illustrator, studying art in his free time under James Bateman and John Mansbridge. He exhibited portraits with the London Portrait Society. On his return to Canada, Dingle became a regular exhibitor at the Ontario Society of Artists annuals and with other groups. Much of his work was sold through the T. Eaton Company’s Fine Art Gallery. He continued to work as an illustrator and also taught art in Kitchener and Etobicoke.

Much of Adrian Dingle’s painting was done in oils and later acrylic and he was known as a prolific painter. During the summers, Dingle traveled to the East coast, where he painted Cape Breton Island and other areas. During the winter, the painter seldom went beyond a 50-mile radius of Toronto. Dingle also painted in Italy, France, Spain, Portugal, the British Isles and Massachusetts.

Adrian Dingle became an Ontario Society of Artists’ member in 1961 and served as president from 1967–70. He became a Royal Canadian Academy member in 1968. Dingle is also known as the creator and artist behind the Second World War comic book, Nelvana of the Northern Lights, which featured a female superhero fighting for justice. Nelvana was one of the world’s first female superheroes. Dingle's work is represented in Ontario museums, as well as corporate and private collections. Dingle died at age 63 in Toronto at Wellesley Hospital due to complications from cancer treatment on December 22, 1974.

(Biography provided by Antique Avenue)
Applied Filters1 result
Creator:Adrian Dingle
1
to
Item Location
1
1
1
1
1
1
1
5,272
1,707
1,500
1,318
Adrian Dingle Painting
By Adrian Dingle
Located in Hamilton, Ontario
This oil painting is representative of Dingle's impressionistic style and titled "At the Base of a Millrace". It is very adventurous in that it attempts to create the illusion of sto...
Category 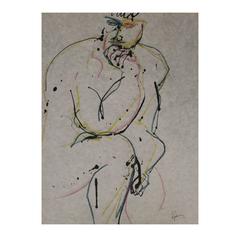 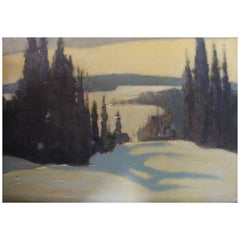 Previously Available Items
Painting by Canadian-Welsh Artist Adrian Dingle, circa 1955
By Adrian Dingle
Located in Toronto, ON
This charming and positive oil on board of a resting row boat is entitled "Evening Vigil".... It is by acclaimed listed Canadian Welsh born artist John Adrian Darley Dingle (1911-19...
Category