Adam Grochowski Grant was born in Warsaw, Poland, in 1924. He knew from the age of 10 that he wanted to be an artist. At the age of 18, Grant was imprisoned in Auschwitz. After being transferred to Mauthausen, his art allowed him to escape the stone quarry, where thousands of prisoners died each week. The camp was liberated in 1945, and Grant spent 5 years in a displaced person camp in Germany before he was sponsored to emigrate to the U. S. in June 1950. He lived in Detroit designing floats for the Christmas parade, as well as working on his own art projects. When the Palmer Paint Company wanted to make a hobby craft that used paints, Dan Robbins thought up paint-by-numbers. In 1951, the sales were booming and Dan Robbins advertised for additional artists. Grant was the first to answer, and he was soon made lead artist at the company. At his new position with Palmer Paint, he met his future wife, Peggy when she was also hired as an artist. He changed his name to Grant, and they married and moved with the company, then Craft Master, to Toledo, where she still lives today. She encouraged him to paint in oils instead of using pen and ink as a medium. He soon began his work as a master of the human figure and often used the female figure as a symbol for life and happiness. His art continued to be an outlet for his experiences in the hands of the Nazis. Over the years, Grant has won much recognition for his works, and they are part of many permanent collections in the Midwest, including from The Butler Institute of American Art, The University of Toledo, Bowling Green State University and the Owens Illinois Corporate collection. 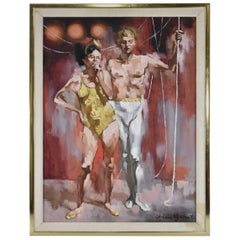 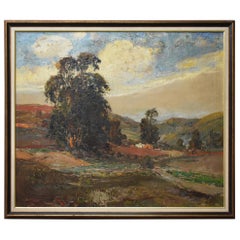 Oil on Canvas Portrait of a Lady by Joseph Gies

Oil on Canvas by Harry Leith-Ross Hunter and Dog

Impresstionists Oil on Board Painting of Ballerinas by Adam Grant