Abraham Walkowitz is perhaps best known for his watercolor studies of Isadora Duncan and the dance. However, Walkowitz laid claim to being the first to exhibit truly modernist paintings in the United States. After 1909, he became an intimate of Alfred Stieglitz's 291 Gallery, and while there became a participant in the debate over modern art in America. Walkowitz was an outspoken proponent of the continuous experimentation in the arts, which was his definition of modernism. As an artist, Walkowitz embodied the changing role of the modernist painter in the United States, as modernism moved from an avant-garde protest against established modes to become an accepted style and tradition.

Abraham Walkowitz was a Russian born, turn-of-the-century immigrant to the United States, who grew up in New York's Lower East Side. He first studied art at the Educational Alliance, the Cooper Union and the National Academy of Design. In 1906, he journeyed to Europe where he studied at the Académie Julian in Paris. Upon his return to the United States in 1907, he became a fully-fledged convert to modernism, and his first exhibit, at the Haas Gallery in that year, brought him a measure of notoriety as well as the attention of Stieglitz and other pioneers of non-objective art. In subsequent years, he became one of the most exhibited painters shown at the 291 Gallery, a fact which was also reflected in the pages of Stieglitz's polemical journal of modernism, camera work. As a result of this early attention, by the time of the Armory Show of 1913, to which Walkowitz contributed several paintings, his work was widely known to both fellow modernists as well as their opponents.

Walkowitz was clearly part of the new vocabulary of American art and criticism. During the 1920s and 1930s, as the first-generation modernists lost their revolutionary cast, and as American realism gained in favor, Walkowitz continued his experiments with form and line, especially in his series of Duncan studies. Although his paintings received less critical attention than they once had, Walkowitz was clearly one of the grand old folk of American modernism. During the depression, Walkowitz was politically active on behalf of unemployed artists supporting various new-deal initiatives in the arts. In the 1940s, Walkowitz gained national attention when he explored the varieties of the modernist vision in the form of an exhibit of 100 portraits of him by 100 artists. The result was widely discussed and was featured in Life magazine in 1944.

In 1945, Walkowitz traveled to Kansas, where he painted landscapes made up largely of strip mines and barns. This was his last venture in active painting — by 1946, glaucoma, which led to his eventual blindness, began to impair his vision and limit his ability to work. Walkowitz then turned to the preparation of a series of volumes of his drawings, designed to illustrate the development of modernism in the 20th century, and in so doing, established his role as a pioneer American modernist. 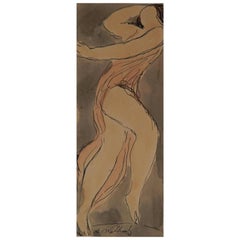 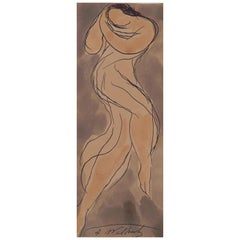 Watercolor by Abraham Walkowitz, Title Bathers on Grassy Shore, circa 1920-1925