Aaron Bohrod's work has not been limited to one style or medium. Initially recognized as a regionalist painter of American scenes, particularly of his native Chicago, Bohrod later devoted himself to detailed still-life paintings rendered in the trompe l'oeil style. He also worked for several years in ceramics and wrote a book on pottery.

Born in 1907, Bohrod began his studies at Chicago's Crane Junior College in 1925, and two years later enrolled in the Art Institute of Chicago. But it was at the Art Students League in New York City, from 1930 to 1932, that he studied under the man believed to be his most significant early influence, John Sloan. Sloan's romantic realism is reflected in the many depictions of Chicago life, which comprised most of Bohrod's early work.

Under Sloan's tutelage, Bohrod came to subscribe to the belief that painters should find the subjects of their art in the immediate world around them. These paintings emphasized architecture unique to north Chicago and featured Chicagoans engaged in such everyday activities as working, playing or going to the theatre. The romantic aspect was conveyed by the use of misty colors, and the realism by attention to detail.

In 1936, Bohrod won the Guggenheim Fellowship award in creative painting. It enabled him to travel the United States, producing similar regionalist paintings on a much broader range of subjects. Nevertheless, most of his early work centered on Chicago and the urban Midwest.

In 1943, Bohrod was commissioned by editors of Life magazine to cover the battlefronts as a war correspondent and artist. Three years later, Bohrod was invited to become the Artist in Residence at the University of Wisconsin, a position that became vacant with the unexpected death of John Steuart Curry. He would remain at the University from 1948 to his retirement in 1973.

Then, quite atypically, fantasy started to appear in his work. Elements of Surrealism, supposedly inspired by his concurrent involvement in ceramics with F. Carlton Ball, began influencing his landscapes. By 1953, Bohrod had completely ceased painting landscapes, turning instead to often symbolic still-life subjects. He abandoned his earlier romantic realism to paint in the luminous trompe l'oeil tradition of William Harnett. Bohrod continued to produce these meticulously crafted fantasies exclusively. While in his position at the University of Wisconsin, Bohrod painted covers for Time magazine and authored two books, A Pottery Sketch-book (1959) and A Decade of Still Life (1966), in which are produced many of his trompe l'oeil paintings. 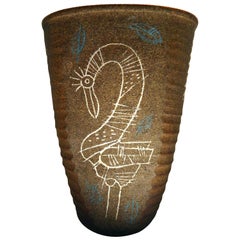 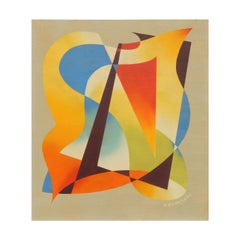 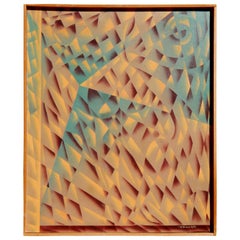 Richard Whorf Oil on Board, circa 1940, New York Subject

Aaron Bohrod's furniture is available for sale on 1stDibs. These distinctive objects are often made of ceramics and are designed with extraordinary care. There are many options in our Aaron Bohrod Furniture collection, although brown editions of this piece are particularly popular. There are 2 vintage versions of these items in stock, while there is 0 modern edition to choose from as well. Many of the original furniture by Aaron Bohrod were created in North America during the 20th century in the Mid-Century Modern style. If you’re looking for additional options, many customers also consider furniture by Salvatore Grippi Furniture, André Gisson Furniture and Rude Osolnik Furniture. Aaron Bohrod Furniture prices can vary depending on size, time period and other attributes. Prices for these items start at $3,500 and top out at $9,500 on 1stDibs. Pieces like these can sell for on average $6,500.